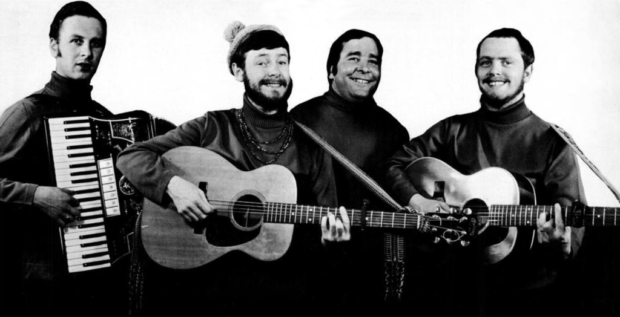 Pure cheese, I thought
when I was a kid. Dad loved
their stuff, life’s blood—the lousy,
beery, stupid Irish Rovers.

Here in Baltimore, where
vinyl’s cheap, I picked one up
for a buck, a Rover’s record,
the whole group in green

polo necks; one’s got on
an emerald bobble cap.
I almost chucked it today,
making space. It seemed lost

next to Zeppelin III, Kid
Ory, and the Diabellis,
like a tyro from RD-1 plunked down
in Port Authority. Instead,

I set the needle on it,
the songs still deeply hokey,
though there’s tenderness, too,
as I listen now, or half-listen,

my mind flashing on a room,
where his fiercely guarded stereo
glowed, among glinting motes,
and where I’d hide out

while he was weeding in
the garden. His LPs
hissed and popped
from unlighted corners,

even this one in my hands,
its earworms boring home,
the doughty, toothy,
jangling Irish Rovers.

David Yezzi’s More Things in Heaven: New and Selected Poems (Measure Press) will be published later this year. He teaches in the Writing Seminars at Johns Hopkins.

Poet and Critic Teow Lim Goh Talks About the Making of her New Book, Faraway Places