“On Not Writing as a West Indian Woman” by Vahni Capildeo 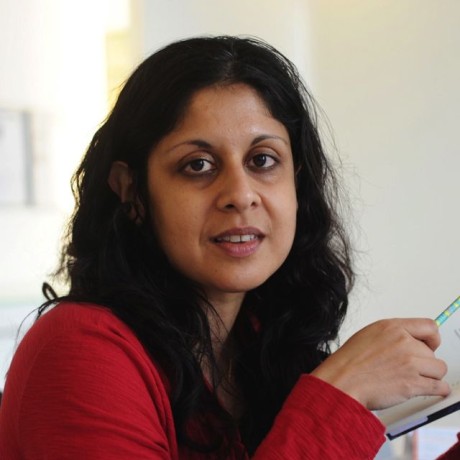 If you get my drift. She—
not containing oceans,
nor a spice triangle,
won’t boast that cinnamon
could launch femme announcements
over the bounding main:
set course for my rich shores.
No allure for sailors.
Blackout drapes in her home.

If you stick with me. She—
hasn’t cooked cassava,
nor become a mother;
might gatecrash Carnival
flaunting last year’s costume
and fall down in the dance;
rack up a huge phone bill
louder than a toucan,
vexed and still calling home.

She push the boat out. She—
on a far-flung causeway
prisoners handbuilt, ice-clawed,
take her pants down, rime-clawed
over sunken warcraft,
pissing into the wind?

Birthcries repeatedly
new, self pull out self, self
issuing that self home.

Born in Trinidad, Vahni Capildeo has lived in the UK since 1991. She is the author of the poetry collections Dark & Unaccustomed Words, No Traveller Returns, Person Animal Figure, and Undraining Sea, and her work has appeared in the anthologies Identity Parade, In the Telling, and The Oxford Book of Caribbean Verse. She is a contributing editor and the UK agent and representative for the Caribbean Review of Books and a member of the International Advisory Board for the Journal of Indo-Caribbean Studies. "On Not Writing as a West Indian Woman"poempoemspoetryVahni Capildeo
Tweet