Join Us at Fergie’s Pub to Celebrate the Publication of John Wall Barger’s New Book, Resurrection Fail, with an All-Star Cast of Readers 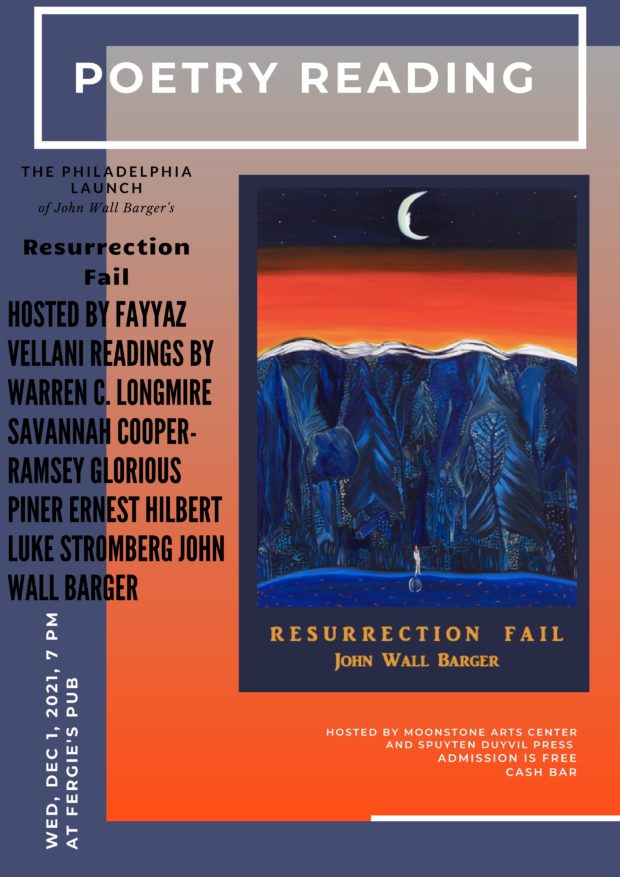 Come on out to Fergie’s Pub to help celebrate the publication of E-Verse Equinox host John Wall Barger’s latest book, Resurrection Fail, hosted by the dashing raconteur and man-of-letters Fayyaz Vellani, featuring an all-star cast of readers, including celebrated and critically-acclaimed Philadelphia poets Warren C. Longmire, Savannah Cooper-Ramsey, Glorious Piner, Luke Stromberg, and Ernest Hilbert. They will read their own poems as well as ones chosen from Resurrection Fail.

John Wall Barger’s poems and critical writing have appeared in American Poetry Review, Kenyon Review Online, Rattle, The Cincinnati Review, The Hopkins Review, Alaska Quarterly Review, Poetry Ireland Review, and Best of the Best Canadian Poetry. His poem, “Smog Mother,” was co-winner of The Malahat Review’s 2017 Long Poem Prize. His fourth collection of poems, The Mean Game (Palimpsest, 2019), currently in its second print run, was a finalist for The Phillip H McMath Book Award. His new collection, Resurrection Fail, is available from Spuyten Duyvil Press. He is a contract editor at Frontenac House. Barger lives in Philadelphia, where he teaches Creative Writing at The University of the Arts.

Host Fayyaz Vellani is a British-Canadian writer who has lived in London, New York, and Philadelphia, where he teaches writing at the University of Pennsylvania. His first novel Tea with Ms. Tanzania will be published by Africa World Press in 2022.

Warren C Longmire is a writer, software engineer, and educator from the bad part of North Philadelphia. His writing has been published in American Poetry Review, Eleven Eleven, The Painted Bride Quarterly, and in Best American Poetry Anthology 2021. He likes jazz, being black, video games, and suffering.

Glorious Piner, BFA ’19, is currently in the MFA program at the University of Maryland focusing on poetry. She teaches Poetry at the University of Maryland and at the University of the Arts. She has two works published in Queerbook, the first-ever anthology released by the first LGBTQ+ bookstore in the country, Giovanni’s Room Bookstore’s attendant press. You can find more of Glorious’ work in the American Poetry Review, the Florida Review, Conduit Magazine, the Scoundrel Time Magazine, and more. Glorious hosts a podcast, called The Writer’s Workshop Cafè, on sustaining and financing the practice of creative writing. She’s also co-hosting another podcast on literature, due to release in the Fall, and curating two anthologies, one on American sonnets and the other on contemporary African American poetry. You can follow @gloriouspiner on every relevant social media platform for updates on the release of projects and forthcoming published works.

Savannah Cooper-Ramsey is the author of the artist book Not Fit for Print (Waterhouse Ltd. 2018). Winner of BOMB Magazine’s 2018 Biennial Poetry Prize and finalist for the 2018 Sandy Crimmins National Poetry Award, her work can be found in publications like BOMB, Dream Pop Journal, and Bedfellows. Savannah works at the Nick Virgilio Haiku Association and teaches at UArts.

Luke Stromberg’s poetry and criticism have appeared in Smartish Pace, The Hopkins Review, The New Criterion, The Philadelphia Inquirer, Think Journal, The Raintown Review, The Dark Horse, Cassandra Voices, and several other venues. He also serves as the Associate Poetry Editor of E-Verse Radio. Luke works as an adjunct professor at Eastern University and La Salle University and lives in Upper Darby, PA.

Ernest Hilbert is the author of Sixty Sonnets, All of You on the Good Earth, Caligulan—selected as winner of the 2017 Poets’ Prize—and Last One Out. He lives in Philadelphia where he works as a rare book dealer and book critic for The Washington Post and The Wall Street Journal. His poem “Mars Ultor” was included in Best American Poetry 2018, and his poems appear in Yale Review, American Poetry Review, BOMB, Harvard Review, Sewanee Review, Hudson Review, Boston Review, The New Republic, American Scholar, and the London Review.

“… while there is darkness aplenty in his work, it is always teeming with life. Barger’s recurrent themes include lust, death, mutilation, shame, and suicide, but there is never any hopelessness in his language or approach. Barger is not afraid of the dark, nor is he trying to master it; he is perpetually trying to know it and to bring it alongside him. And as the poetry unfurls through his most recent book, Resurrection Fail, we begin to see that darkness as the poet may see it: a night full of color and depth, always breathing with unmistakable, and at times even joyous, life.” — Cameron MacKenzie, in Plume

“In this book, moths crowd a wall, ‘wings stamped / with antiquated signs,’ transform into a living mosaic. John Wall Barger’s voice alights on kinship, anecdote-rich cities, and love’s intricate geometries. I leaned close to the page, to his voice—I felt like I was part of the conversation. This intimacy is testament to Barger’s deft control of language. His voice is also a mosaic, alive with human music.” — Eduardo C. Corral

“John Wall Barger’s poems begin easily, in comfort and quotidian intimacy, and end just as easily in surprise and wonder and amazement. In between they take us through all the registers of human imagination. They intermingle the domestic with the cosmic, the local with the global, the ephemeral with the eternal. They are testaments to both the wild metamorphic power of poetic language and its moral capability, clarity, and spiritual strength.” — Vijay Seshadri

“John Wall Barger’s poems win our respect with their hard truths and our love with their compassionate telling of them. With a breathtaking ferocity of feeling, his lyric narratives amble out of memory into surprise—surprise at the horrors we are capable of and at our resilience in enduring them. Following Kierkegaard’s belief that “Life can only be understood backwards,” Barger chases the receding years, the past revealed in a series of wrenching shocks: “Like the anatomy student I once met / who slid the sheet / off a corpse / and there was / his childhood crush.” This is essential poetry, a singular and vital record of the pain and joy that attend on living.” — David Yezzi

“As its title suggests, Resurrection Fail is a worthy paradox, blending John Wall Barger’s enviable economy of style with a luxury of spirit that glimmers beneath both his speaker’s fetching enthusiasms and deep sorrows. These poems capture how the world’s beauty and brutality are bound together; that we fail and–if we’re lucky–find the will to resurrect ourselves over and over again. But for all this poet’s clear seriousness of purpose, there’s a vivid, often witty life force here that reminds me that I’m glad to be alive. I really loved getting to know this book and I bet you will, too.” — Erin Belieu