“Excerpt from ‘The Rise of the COVFEFE'” by James Feichthaler 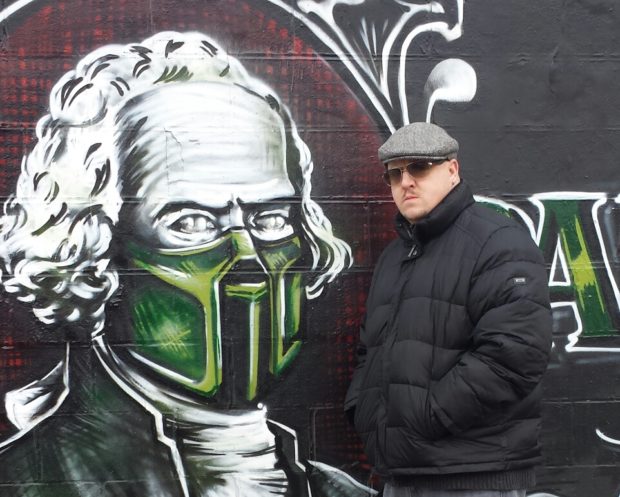 You motherfuckers just don’t get it, do you?
The Revolution’s being televised!
And we’re the shit now, yes, the frigging doo-doo,
The bully on the block, but pocket-sized!
Available at a finger’s click, comprised
Of many tiny armies (in machines),
In your smart-devices, dumbing down your genes.

So let’s just end this now, you fucking dummies,
The xenophobia is getting tiring;
We don’t want you here either, my compadres,
You’re not that fun, and hardly that inspiring.
Conspiring ‘gainst us all, you’ll be expiring
With the next wave of terrorists that appear:
Maybe tomorrow, maybe late next year.

Another junky scores a bag of dope,
Another priest is fondling a fanny,
Another bath-salt zombie’s snorting soap,
Another soulless singer wins a Grammy:
It’s all according to our plan! And Plan B
Is to delete your file, like you weren’t even here,
Your name, your lame identity, your fear.

It’s wildly simple, crudely monumental,
Amazingly discreet but in your face;
A peaceful plan that’s somehow suicidal,
A homicidal mash of rage and grace.
This folly that we feed you’s out of place,
But it’s right on time, in every single way!
Appropriately served up on a tray

Of ash and cigarettes, steroidal burgers,
Burritos, hot wings, cold cuts, farm-raised fish
That fed on their own feces– cutting corners
Is necessary, giving you your wish.
The delicacy depends upon the dish:
And serving death takes practice, even patience,
And lots of sexy ads on all the stations.

Sex sells, you know? Addiction is like sex!
It feels so good, until you’re spending dough
To please your wife, your mistress, and your ex,
As many appetites; it kills you slow
And overwhelms you, always on the low:
Since nobody but you knows what you’re thinking,
How many pills you popped, how much you’re drinking.

But we know everything about you, friend!
And if we don’t, we’ll fudge some kind of story:
News at eleven! man goes on a bend,
Shoots store-clerk then himself, the scene was gory.
He left this letter: “Everyone, I’m sorry,
But I just couldn’t take it anymore…
Please feed my pet cat Ralph, and pay my whore.”

We know your whereabouts, the place you shit,
What clothes you wear, what foods you like to eat,
Bank statements, numbers, credit cards, legit,
The fake ID’s you forged, the things you Tweet;
Drunk texts you sent, explicit, lustful, sweet:
The double D’s you bought your favorite mistress,
The chlamydia she gave to you last Christmas.

And now, we’re studying your fall from grace,
Enjoying each crazed minute of your slide!
A well-known hothead, easy enough to trace,
The stolen burner always at your side.
Hands in the air! It’s time you fin’lly died
And met your Maker, paid us back in full!
Ashes to ashes, bullet through the skull…


James Feichthaler’s poetry has appeared in numerous print and online journals in both the US and UK. His poems are truthful odes to his Imagination, which he calls, “the lunatic disciple of his existence.” The self-proclaimed “forrealist poet” is the host of an open mic reading series called “The Dead Bards of Philadelphia,” which is held once a month at the Venice Island Performing Arts Center in Manayunk, PA. His first book Three Incantations of the Modern Druid will be published by Parnilis Media and is due out in 2017. You can follow James’s poetic exploits on Twitter at @forrealist_poet and keep up with The Dead Bards of Philadelphia on Facebook.

"Too Much Time on My Hands": Ryan Adams Covers Iron Maiden's "Wasted Years"