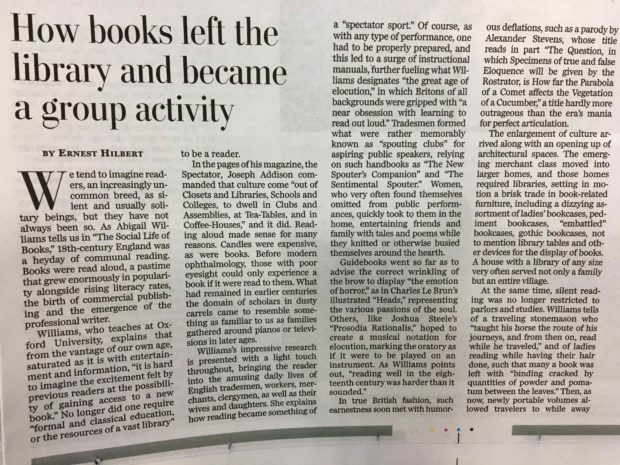 My review of Abigail Williams’ new book, The Social Life of Books: Reading Together in the Eighteenth-Century Home, appears in the Sunday, July 16th issue of The Washington Post newspaper. I was surprised and pleased by the intelligent comments left by Post readers below the online version (I’m used to the Philly.com comments section . . .) as well as the flurry of activity that followed on social media. I am currently at work on another piece for The Washington Post, to appear in the early autumn.

You can read my review of The Social Life of Books online at The Washington Post or in the Philadelphia Inquirer, where it also appeared that day.

We tend to imagine readers, an increasingly uncommon breed, as silent and usually solitary beings, but they have not always been so. As Abigail Williams tells us in The Social Life of Books, 18th-century England was a heyday of communal reading. Books were read aloud, a pastime that grew enormously in popularity alongside rising literacy rates, the birth of commercial publishing and the emergence of the professional writer.

Williams, who teaches at Oxford University, explains that from the vantage of our own age, saturated as it is with entertainment and information, “it is hard to imagine the excitement felt by previous readers at the possibility of gaining access to a new book.” No longer did one require “formal and classical education, or the resources of a vast library” to be a reader.

In the pages of his magazine, the Spectator, Joseph Addison commanded that culture come “out of Closets and Libraries, Schools and Colleges, to dwell in Clubs and Assemblies, at Tea-Tables, and in Coffee-Houses,” and it did. Reading aloud made sense for many reasons. Candles were expensive, as were books. Before modern ophthalmology, those with poor eyesight could only experience a book if it were read to them. What had remained in earlier centuries the domain of scholars in dusty carrels came to resemble something as familiar to us as families gathered around pianos or televisions in later ages.