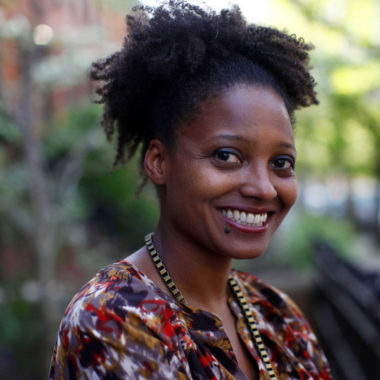 I spent two years not looking
Into the mirror in his office.
Talking, instead, into my hands
Or a pillow in my lap. Glancing up
Occasionally to let out a laugh.
Gradually it felt like a date with a friend,
Which meant it was time to end.

Two years later, I saw him walking
Up Jay Street into the sun. No jacket,
His face a little chapped from wind.
He looked like an ordinary man carrying
Shirts home from the laundry, smiling
About something his daughter had said
Earlier that morning. Back before

You existed to me, you were a theory.
Now I know everything: the words you hate.
Where you itch at night. In our hallway,
There are five photos of your dead wife.
This is what we mean by sharing a life. Still,
From time to time, I think of him watching me
From over the top of his glasses, or eating candy

From a jar. I remember thanking him each time
The session was done. But mostly what I see
Is a human hand reaching down to lift
A pebble from my tongue.

Tracy K. Smith is the author of three books of poetry: The Body’s Question (2003); Duende (2007); Life on Mars (2011), winner of the Pulitzer Prize for Poetry; and Wade in the Water (forthcoming, April 2018). She has also written a memoir, Ordinary Light (2015), which was a finalist for the National Book Award in nonfiction. In June 2017, Smith was named U.S. poet laureate. She teaches creative writing at Princeton University.

0
"Watching My Mother Take Her Last Breath" by Leon Stokesbury