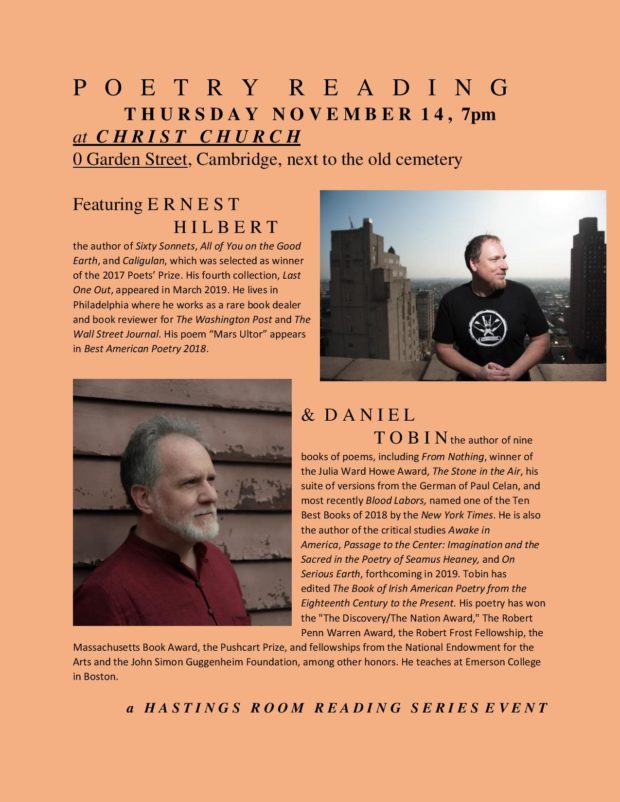 Daniel Tobin is the author of eight books of poems, Where the World is Made (University Press of New England, 1999), Double Life (Louisiana State University Press, 2004), The Narrows (Four Way Books, 2005), Second Things (Four Way Books, 2008), Belated Heavens (Four Way Books, 2010), The Net (Four Way Books, 2014), From Nothing (Four Way Books, 2016), and Blood Labors (Four Way Books, 2018), as well as The Stone in the Air, his suite of versions from the German of Paul Celan (Salmon Poetry, 2018). Among his awards are the Massachusetts Book Award in Poetry, “The Discovery/The Nation Award,” The Robert Penn Warren Award, the Greensboro Review Prize, the Robert Frost Fellowship, the Katherine Bakeless Nason Prize, the Julia Ward Howe Prize, the Stephen J. Meringoff Award in Poetry, and creative writing fellowships in poetry from the National Endowment for the Arts and the John Simon Guggenheim Foundation. The Narrows was a featured book on Poetry Daily, as well as a finalist for the ForeWord Magazine Poetry Book Award. His poems have appeared nationally and internationally in such journals as The Nation, The New Republic, The Harvard Review, Poetry, The American Scholar, The Paris Review, The Southern Review, The Sewanee Review, The Hudson Review, The Kenyon Review, Image, The Times Literary Supplement (England), Stand (England), Agenda(England), Descant (Canada), and Poetry Ireland Review. His critical study, Passage to the Center: Imagination and the Sacred in the Poetry of Seamus Heaney, came out to wide praise from the University of Kentucky Press in 1999. His recent book of essays, Awake in America, appeared from the University of Notre Dame Press in 2011. Tobin has also edited The Book of Irish American Poetry from the Eighteenth Century to the Present (University of Notre Dame Press, 2007), Light in the Hand: The Selected Poems Lola Ridge (Quale Press, 2007), (with Pimone Triplett) Poet’s Work, Poet’s Play: Essays on the Practice and the Art (University of Michigan Press, 2007), and To The Many: Collected Early Works of Lola Ridge, which received a Special Commendation from the Poetry Society (UK). His work has been anthologized in Hammer and Blaze, The Bread Loaf Anthology of New American Poets, Poetry Daily Essentials 2007, Broken Land: Poems of Brooklyn, Third Rail: The Poetry of Rock and Roll, The Norton Introduction to Poetry, and elsewhere. He has also published numerous essays on modern and contemporary poetry in the United States and abroad. He teaches at Emerson College in Boston.

Ernest Hilbert is the author of Sixty Sonnets, All of You on the Good Earth, and Caligulan, which was selected as winner of the 2017 Poets’ Prize. His fourth collection, Last One Out, appeared in March 2019. He lives in Philadelphia where he works as a rare book dealer and book reviewer for The Washington Post and The Wall Street Journal. His poem “Mars Ultor” appeared in Best American Poetry 2018. His poems have appeared in Yale Review, American Poetry Review, Harvard Review, Parnassus, Sewanee Review, Hudson Review, Boston Review, The New Republic, American Scholar, and the London Review. Visit him at www.ernesthilbert.com.

0
"Look Me in the Face Sonnet" by Thomas Devaney

"Let it Leak! I’m All Aleak Myself": Ernest Hilbert Reads from Moby-Dick