“Vertebrate” by Ernest Hilbert in 32 Poems 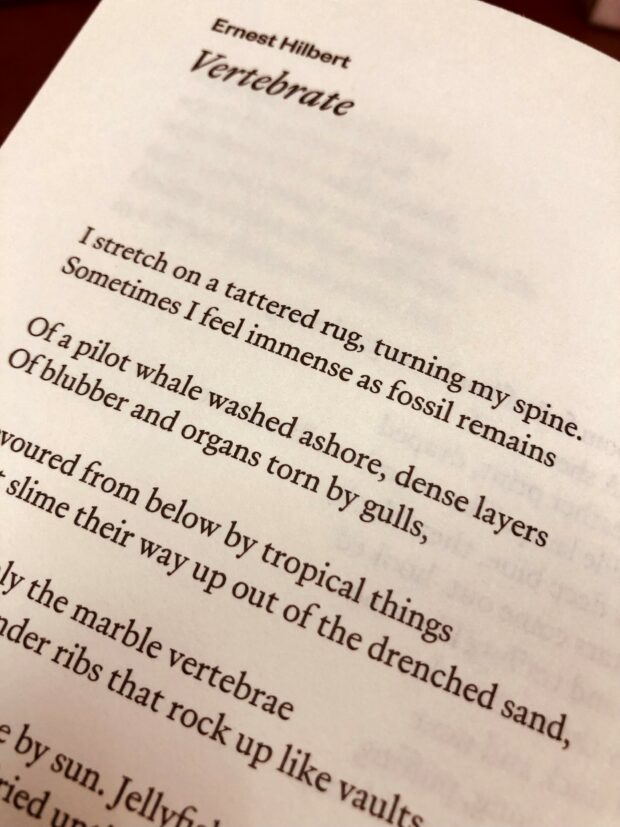 I stretch on a tattered rug, turning my spine.
Sometimes I feel immense as fossil remains

Of a pilot whale washed ashore, dense layers
Of blubber and organs torn by gulls,

Devoured from below by tropical things
That slime their way up out of the drenched sand,

Until only the marble vertebrae
Remain under ribs that rock up like vaults,

Polished white by sun. Jellyfish are caught
As if in teeth, dried until invisible.

Terrestrial crabs with furry black legs
Scale and descend all day like workmen.

Warm surf splashes up and slithers back down
Through thoracic castles, where once much pain,

And longing, and an essential flicker
Of life’s movement and radiance ran through—

No more the vast call of seething cold gulfs
Aswarm with sustenance, no zoom of fluke,

Printed twice a year (in July and December) and distributed internationally with subscribers in over twenty countries, each issue of 32 Poems includes 32 shorter poems. This minimalist focus has fostered an intimate and intensive reading experience since 2002, when Deborah Ager and John Poch founded the journal as an alternative to larger and less-selective literary magazines.

In its nineteen years, 32 Poems has showcased many of the most-recognized poets writing in English, including Pulitzer Prize, National Book Award, and MacArthur Genius Grant winners, Poets Laureate, and recipients of the other major honors in American letters. The journal also prides itself on championing talented writers early in their careers and often features poets appearing in print for the first time. Our emerging poets have gone on to earn such honors as “Discovery”/The Nation Prizes, the National Poetry Series, Ruth Lilly Fellowships, Stegner Fellowships, and many other first book prizes, fellowships, and awards. Work first appearing in 32 Poems can be found frequently reprinted in both the Best American Poetry and Best New Poets series, on such “best of” sites as Verse Daily and Poetry Daily, and in a wide variety of anthologies. Selections from 32 Poems have been made into short films and recited by high school students in national Poetry Out Loud Contests. And in 2012, WordFarm published Old Flame, a collection drawn from 32 Poems’ first 10 years of publication. A finalist for the Foreword Book of the Year Award, Old Flame pairs 64 of the journal’s best lyrics with brief prose commentaries from the poets themselves.

Since 2011, George David Clark has edited the journal, now based in Washington, Pennsylvania. In 2013, 32 Poems expanded to begin publishing regular prose features online. These reviews, essays, and interviews have themselves been reprinted in collections of essays and criticism and in such series as the Poetry Daily Prose Feature. The journal also partners with teachers of creative writing through a program called 32 Classrooms in which editors introduce students to the craft of literary editing, discuss work featured in recent issues, and invite student contributions to 32 Poems’ prose features.