“‘That scantlie frae the cauld I micht defend’” by Gerry Cambridge 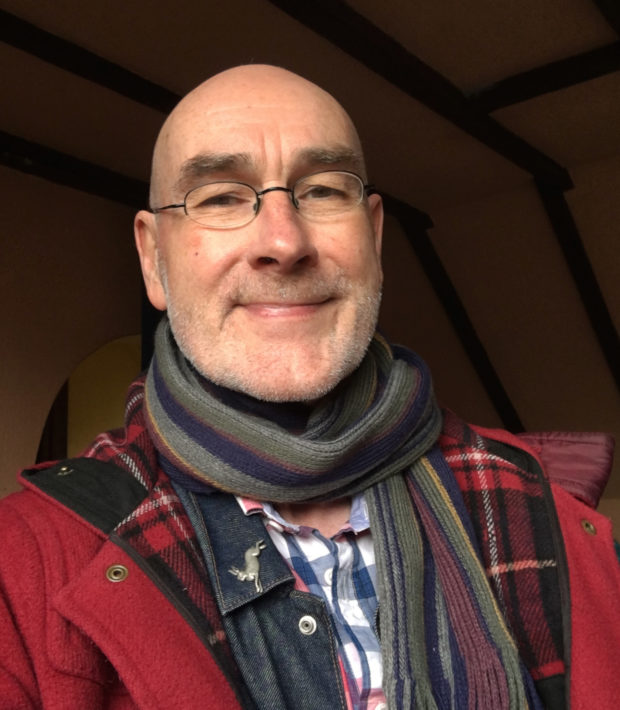 Henrysoun, back in his century, has just
mendit the fire and beikit him aboot
but the flame in my gas fire had shrunk
to a peep. I laid the book aside. One a.m.
December. The whole hilltop site was asleep bar me
in my box of aluminium in the frost-locked night.
I was starting to feel the chill. So
it meant carrying the just-boiled kettle out
under winter stars—Hello Orion, Sirius, hello!—
over crunching grass to the canister
of Propane at the kitchen window. I poured
the boiling liquid all down its skinkling red.
The metal crackled, as if I’d freed some demon; the gas
rushed through: a cloud of steam, lit by the window, rose
to that wide starlit air and thinned. And I crunched back
to the gas fire glowing the white grille red again,
opened the book like a door, and slipped inside. There
the enigmatic bard is telling his grievous story
in perfect Rime Royal. He will go on telling it
to the human end of time, the old grim tale
made beautiful. (My feet are warm again.
The fire hisses at the frosty dark.)
In that small box of light I still read him.

Note: The title is a line from Robert Henrysoun’s medieval Scots poem “The Testament of Cresseid,” which Tom Scott in The Penguin Book of Scottish Verse called the greatest poem in Scottish literature. I first read it in the Ayrshire caravan I lived in for twenty years, 1977–1997. The second line of my poem is a slight recension of the relevant line in Henrysoun’s original. Beikit me aboot: made myself warm. Skinkling: sparkling.

The Scottish poet Gerry Cambridge founded the transatlantic magazine The Dark Horse, still Scotland’s leading poetry journal, in 1995. He is also an essayist, print designer and typographer, with a background in natural history photography. He lived in an Ayrshire caravan for twenty-five years before leaving to become a Brownsbank Fellow in Hugh MacDiarmid’s former home for 1997–1999. In his early twenties he was, as far as he knows, one of the youngest ever regular freelancers, specialising in nature articles, for the UK Reader’s Digest, which at the time (the 1980s) had a monthly circulation of 1.5 million copies.

0
Amy Glynn's Poem "The Rape Of Proserpina" Appears in the Latest Installment of Ernest Hilbert's Cocytus: A Dark Web Magazine