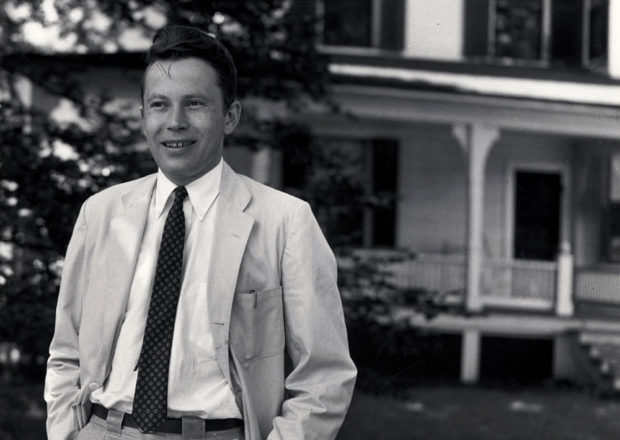 This is a charming little film about Richard Wilbur and Robert Lowell made sometime in the early to mid-1960’s. In black and white footage, we see Wilbur in a suit (sometimes with open collar), awkwardly strolling for the cameras (what we might call B roll), hesitatingly answering questions, clearly not accustomed to cameras rolling while he conjures thoughts. Wilbur reads wonderfully from his poems “On the Marginal Way” (then his most recent), “The Beautiful Changes,” and “Advice to a Prophet.” Ever modest, he admits it’s not “formal problems that slow me down, it’s thinking, something at which I’m very slow. Sometimes it will hold me up for a year and a half, thinking about some way to make my next point, or some way of discovering what my next point is to be.” He later tells us that “when the bomb fell on Hiroshima, a fellow soldier said to me, ‘I bet you can’t write a poem about this.’ I wouldn’t take his bet. I finally discovered an approach that was not only going to say don’t drop the bomb, not only going to reflect my fear about it, but would make a good poem.” The poem in question is, of course, “Advice to a Prophet.”

A soft-spoken Lowell reclines almost genteelly on a sofa in a book-lined living room, cigarette balanced between his fingers, talking freely about poetry, history, war, mortality, free will, and his beloved Maine (he reads three poems set there). About his famous poem “Water” he remarks that the ocean in the poem may stand for “liberation” or, alternately, something “dangerous.” He somewhat surprisingly talks about the seal that appears in his poem “Soft Wood” as an animal he believes “lives without strain” (perhaps because seals bask on rocks). With great admiration he confesses he “could find no flaws in the seal.” Before reading “The Flaw,” he describes a flaw in the eye that can seem to be outside the eye but is actually a part of the eye, going on to ruminate about “decay and injury and mortality,” as well as free will and love. He also reads “Fall 1961,” commenting that the poem begins with fixed time, “something mechanical, like the manufacture of an atom bomb,” and ends with nature, including “the possibility of a nature where man no longer exists” (cf. “Advice to a Prophet”). He concludes with “The Opposite House,” describing an abandoned house across from one in which he lived and how it was transformed in the night to something altogether different from what it seemed in the day. This transformation leads him to a complicated and extensive political meditation.

This is a welcome opportunity to hear the poets read substantial and powerful poems in what Auden dubbed The Age of Anxiety, when the threat of nuclear annihilation loomed large in the minds of poets and occupied their verse.

“On the Marginal Way” by Richard Wilbur

Another cove of shale,
But the beach here is rubbled with strange rock
That is sleek, fluent, and taffy-pale.
I stare, reminded with a little shock
How, by a shore in Spain, George Borrow saw
A hundred women basking in the raw.

They must have looked like this,
That catch of bodies on the sand, that strew
Of rondure, crease, and orifice,
Lap, flank, and knee–a too abundant view
Which, thought he’d had the lenses of a fly,
Could not have waked desire in Borrow’s eye.

Has the light altered now?
The rocks flush rose and have the melting shape
Of bodies fallen anyhow.
It is a Gericault of blood and rape,
Some desert town despoiled, some caravan
Pillaged, its people murdered to a man,

And those who murdered them
Galloping off, a rumpling line of dust
Like a wave’s white, withdrawing hem.
But now the vision of a colder lust
Clears, as the wind goes chill and all is greyed
By a swift cloud that drags a carrion shade.

If these are bodies still,
Theirs is a death too dead to look asleep,
Like that of Auschwitz’ final kill,
Poor slaty flesh abandoned in a heap
And then, like sea-rocks buried by a wave,
Bulldozed at last into a common grave.

It is not tricks of sense
But the time’s fright within me which distracts
Least fancies into violence
And makes my thought take cover in the facts,
As now it does, remembering how the bed
Of layered rock two miles above my head

Hove ages up and broke
Soundless asunder, when the shrinking skin
Of Earth, blacked out by steam and smoke,
Gave passage to the muddled fire within,
Its crannies flooding with a sweat of quartz,
And lathered magmas out of deep retorts

Welled up, as here, to fill
With tumbled rockmeal, stone-fume, lithic spray,
The dike’s brief chasm and the sill.
Weathered until the sixth and human day
By sanding winds and water, scuffed and brayed
By the slow glacier’s heel, these forms were made

That now recline and burn
Comely as Eve and Adam, near a sea
Transfigured by the sun’s return.
And now three girls lie golden in the lee
Of a great arm or thigh, and are as young
As the bright boulders that they lie among.

Though, high above the shore
On someone’s porch, spread wings of newsprint flap
The tidings of some dirty war,
It is a perfect day: the waters clap
Their hands and kindle, and the gull in flight
Loses himself at moments, white in white,

And like a breaking thought
Joy for a moment floods into the mind,
Blurting that all things shall be brought
To the full state and stature of their kind,
By what has found the manhood of this stone.
May that vast motive wash and wash our own.

“The Beautiful Changes” by Richard Wilbur

One wading a Fall meadow finds on all sides
The Queen Anne’s Lace lying like lilies
On water; it glides
So from the walker, it turns
Dry grass to a lake, as the slightest shade of you
Valleys my mind in fabulous blue Lucernes.

The beautiful changes as a forest is changed
By a chameleon’s tuning his skin to it;
As a mantis, arranged
On a green leaf, grows
Into it, makes the leaf leafier, and proves
Any greenness is deeper than anyone knows.

Your hands hold roses always in a way that says
They are not only yours; the beautiful changes
In such kind ways,
Wishing ever to sunder
Things and things’ selves for a second finding, to lose
For a moment all that it touches back to wonder.

“Advice to a Prophet” by Richard Wilbur

When you come, as you soon must, to the streets of our city,
Mad-eyed from stating the obvious,
Not proclaiming our fall but begging us
In God’s name to have self-pity,

Spare us all word of the weapons, their force and range,
The long numbers that rocket the mind;
Our slow, unreckoning hearts will be left behind,
Unable to fear what is too strange.

Nor shall you scare us with talk of the death of the race.
How should we dream of this place without us?—
The sun mere fire, the leaves untroubled about us,
A stone look on the stone’s face?

Speak of the world’s own change. Though we cannot conceive
Of an undreamt thing, we know to our cost
How the dreamt cloud crumbles, the vines are blackened by frost,
How the view alters. We could believe,

If you told us so, that the white-tailed deer will slip
Into perfect shade, grown perfectly shy,
The lark avoid the reaches of our eye,
The jack-pine lose its knuckled grip

On the cold ledge, and every torrent burn
As Xanthus once, its gliding trout
Stunned in a twinkling. What should we be without
The dolphin’s arc, the dove’s return,

These things in which we have seen ourselves and spoken?
Ask us, prophet, how we shall call
Our natures forth when that live tongue is all
Dispelled, that glass obscured or broken

In which we have said the rose of our love and the clean
Horse of our courage, in which beheld
The singing locust of the soul unshelled,
And all we mean or wish to mean.

Ask us, ask us whether with the worldless rose
Our hearts shall fail us; come demanding
Whether there shall be lofty or long standing
When the bronze annals of the oak-tree close.

It was a Maine lobster town—
each morning boatloads of hands
pushed off for granite
quarries on the islands,

and left dozens of bleak
white frame houses stuck
like oyster shells
on a hill of rock,

and below us, the sea lapped
the raw little match-stick
mazes of a weir,
where the fish for bait were trapped.

Remember? We sat on a slab of rock.
From this distance in time
it seems the color
of iris, rotting and turning purpler,

but it was only
the usual gray rock
turning the usual green
when drenched by the sea.

The sea drenched the rock
at our feet all day,
and kept tearing away
flake after flake.

One night you dreamed
you were a mermaid clinging to a wharf-pile,
and trying to pull
off the barnacles with your hands.

We wished our two souls
might return like gulls
to the rock. In the end,
the water was too cold for us.

Back and forth, back and forth
goes the tock, tock, tock
of the orange, bland, ambassadorial
face of the moon
on the grandfather clock.
All autumn, the chafe and jar
of nuclear war;
we have talked our extinction to death.
I swim like a minnow
behind my studio window.

Our end drifts nearer,
the moon lifts,
radiant with terror.
The state
is a diver under a glass bell.

A father’s no shield
for his child.
We are like a lot of wild
spiders crying together,
but without tears.

Nature holds up a mirror.
One swallow makes a summer.
It’s easy to tick
off the minutes,
but the clockhands stick.

"The Man In The Dead Machine" by Donald Hall