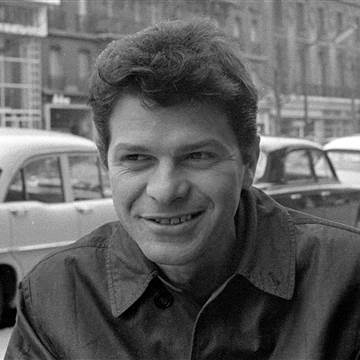 Should I get married? Should I be good?
Astound the girl next door with my velvet suit and faustus hood?
Don’t take her to movies but to cemeteries
tell all about werewolf bathtubs and forked clarinets
then desire her and kiss her and all the preliminaries
and she going just so far and I understanding why
not getting angry saying You must feel! It’s beautiful to feel!
Instead take her in my arms lean against an old crooked tombstone
and woo her the entire night the constellations in the sky—

When she introduces me to her parents
back straightened, hair finally combed, strangled by a tie,
should I sit knees together on their 3rd degree sofa
and not ask Where’s the bathroom?
How else to feel other than I am,
often thinking Flash Gordon soap—
O how terrible it must be for a young man
seated before a family and the family thinking
We never saw him before! He wants our Mary Lou!
After tea and homemade cookies they ask What do you do for a living?

Should I tell them: Would they like me then?
Say All right get married, we’re losing a daughter
but we’re gaining a son—
And should I then ask Where’s the bathroom?

O God, and the wedding! All her family and her friends
and only a handful of mine all scroungy and bearded
just waiting to get at the drinks and food—
And the priest! He looking at me if I masturbated
asking me Do you take this woman for your lawful wedded wife?
And I trembling what to say say Pie Glue!
I kiss the bride all those corny men slapping me on the back
She’s all yours, boy! Ha-ha-ha!
And in their eyes you could see some obscene honeymoon going on—

Then all that absurd rice and clanky cans and shoes
Niagara Falls! Hordes of us! Husbands! Wives! Flowers! Chocolates!
All streaming into cozy hotels
All going to do the same thing tonight
The indifferent clerk he knowing what was going to happen
The lobby zombies they knowing what
The whistling elevator man he knowing
The winking bellboy knowing
Everybody knowing! I’d be almost inclined not to do anything!
Stay up all night! Stare that hotel clerk in the eye!
Screaming: I deny honeymoon! I deny honeymoon!
running rampant into those almost climatic suites
yelling Radio belly! Cat shovel!
O I’d live in Niagara forever! in a dark cave beneath the Falls
I’d sit there the Mad Honeymooner
devising ways to break marriages, a scourge of bigamy
a saint of divorce—

But I should get married I should be good
How nice it’d be to come home to her
and sit by the fireplace and she in the kitchen
aproned young and lovely wanting my baby
and so happy about me she burns the roast beef
and comes crying to me and I get up from my big papa chair
saying Christmas teeth! Radiant brains! Apple deaf!
God what a husband I’d make! Yes, I should get married!
So much to do! like sneaking into Mr Jones’ house late at night
and cover his golf clubs with 1920 Norwegian books
Like hanging a picture of Rimbaud on the lawnmower
like pasting Tannu Tuva postage stamps all over the picket fence
like when Mrs Kindhead comes to collect for the Community Chest
grab her and tell her There are unfavorable omens in the sky!
And when the mayor comes to get my vote tell him
When are you going to stop people killing whales!
And when the milkman comes leave him a note in the bottle
Penguin dust, bring me penguin dust, I want penguin dust—

Yet if I should get married and it’s Connecticut and snow
and she gives birth to a child and I am sleepless, worn,
up for nights, head bowed against a quiet window, the past behind me,
finding myself in the most common of situations a trembling man
knowledged with responsibility not twig-smear not Roman coin soup—
O what would that be like!
Surely I’d give it for a nipple a rubber Tacitus
For a rattle bag of broken Bach records
Tack Della Francesca all over its crib
Sew the Greek alphabet on its bib
And build for its playpen a roofless Parthenon

No, I doubt I’d be that kind of father
not rural not snow no quiet window
but hot smelly New York City
seven flights up, roaches and rats in the walls
a fat Reichian wife screeching over potatoes Get a job!
And five nose running brats in love with Batman
And the neighbors all toothless and dry haired
like those hag masses of the 18th century
all wanting to come in and watch TV
The landlord wants his rent
Grocery store Blue Cross Gas & Electric Knights of Columbus
Impossible to lie back and dream Telephone snow, ghost parking—
No! I should not get married and I should never get married!
But—imagine if I were to marry a beautiful sophisticated woman
tall and pale wearing an elegant black dress and long black gloves
holding a cigarette holder in one hand and highball in the other
and we lived high up a penthouse with a huge window
from which we could see all of New York and even farther on clearer days
No, I can’t imagine myself married to that pleasant prison dream—

O but what about love? I forget love
not that I am incapable of love
it’s just that I see love as odd as wearing shoes—
I never wanted to marry a girl who was like my mother
And Ingrid Bergman was always impossible
And there maybe a girl now but she’s already married
And I don’t like men and—
but there’s got to be somebody!
Because what if I’m 60 years old and not married,
all alone in furnished room with pee stains on my underwear
and everybody else is married! All in the universe married but me!

Ah, yet well I know that were a woman possible as I am possible
then marriage would be possible—
Like SHE in her lonely alien gaud waiting her Egyptian lover
so I wait—bereft of 2,000 years and the bath of life.

0
Photos from the Mexico City Performance of "Nights of 1998"