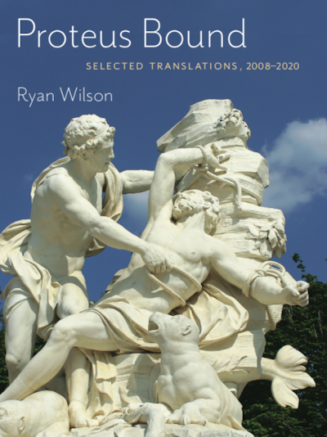 Lord: it is Time. Sweet Summer’s met its end.
Cast Thy shadow over the sundials,
And, on the open fields, unleash the wind.

Command the lingering fruits to ripen; grant
Them two more afternoons warm on the vine,
Then urge them toward their perfect shape and plant
The final sweetness in the potent wine.

Whoever’s homeless now will always be.
Whoever’s lonesome now will long forbear,
Will wake, read, write out letters endlessly
And wander shaded streets, first here, then there,
Restless, the dry leaves swirling in the air.

Ryan Wilson is the author of The Stranger World, winner of the Donald Justice Poetry Prize, and How to Think Like a Poet, and he is co-editor, along with April Linder, of the forthcoming anthology Contemporary Catholic Poetry. His work appears in periodicals such as Best American Poetry, Five Points, Hopkins Review, New Criterion, Sewanee Review, and Yale Review. Editor-in-chief of Literary Matters (literarymatters.org), he teaches at The Catholic University of America and in the MFA program at the University of St. Thomas-Houston. Website: https://ryanwilsonpoetry.com/books/pb/

The translations—or “conversions”—in this book make available to contemporary readers of English-language poetry a wealth of poems that belong to what T.S. Eliot called “the tradition.” From Homer, Sappho, and Archilochus to Catullus, Horace, and Virgil; from Dante, Villon, and Lope de Vega to Baudelaire, Rilke, and Pessoa; this book presents fresh versions of many of the best-loved poems in the Western European tradition in strikingly new versions, allowing readers without access to the originals the opportunity to possess, in some measure, both the sense and style of these monumental works.

“Did Ryan Wilson wager with himself that he could choose some of the most familiar poems in European literature and bring them so freshly into English that they are new again? If so, he owes himself a ten-spot, for Proteus Bound achieves that goal with seeming nonchalance.” – Fred Chappell

“Wilson’s choices are always responsible and responsive, as manifested in the elegant music of his versification.” – David Ferry

“Nothing renews the tradition more certainly than the attentions that a poet-translator of Wilson’s caliber gives to the great poems of the past…This is work that both honors the tradition and shows why we would wish to do such a thing.” – Charles Martin

“What a treasure! This invigorating book brings us close to some of the most beautiful lyric poems ever written…As implied by the title, Wilson’s method is protean: the translator is one who transforms himself into each of the various authors’ projections of self, inhabiting the soul of each persona. As a result, these great poets are still with us, and we are with them.” – Grace Schulman

“This anthology . . . represents a sweeping literary education unto itself.” – A.E. Stallings