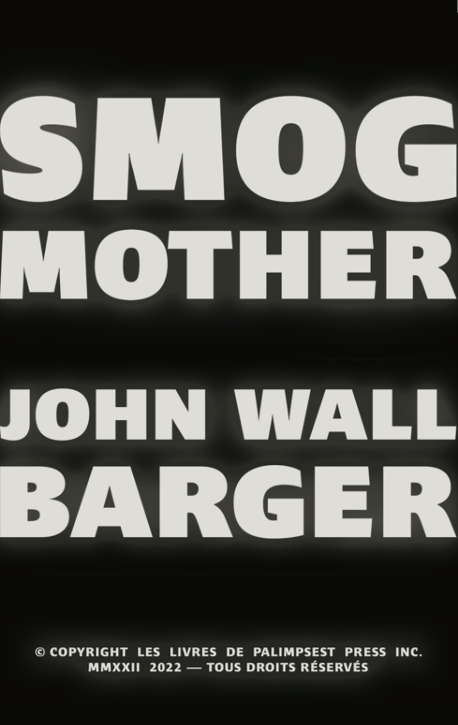 A hardbitten lady holding a tiny radio
in two hands like a hobo with a hat
smiles. The very merest gesture.
A grin like a flag or a noose—
something broken free and scattered
in the four winds. Rain taps
the windows. She gets off but her grin
flutters on, moth in a dark hall.
A memory crawls like a scorpion
out of a shoe: a boxing match on TV
I once sat on a dirt road to watch
with locals in Palawan. Pacquiao,
crowd favorite, hammered De La Hoya.
We cheered. Before the ninth,
De La Hoya’s corner threw in the towel.
Handsome De La Hoya, eye mashed
shut, mouth twisted, a punctured
balloon of a man, smashed bust
of a god. Our collective error
and our flaming heart. He grinned.

“What a joy to have another book by John Wall Barger. Restless, passionate, and ambitious, Smog Mother is an ecstatic travelogue whose narrator is always on the move, full of yearning and curiosity, even as he remains an outsider in each country that he visits. The poems in Smog Mother ask probing questions about love and empathy, and about what it means to be a spectator to other people’s pain. Barger is introspective and self-critical, yet far more interested in others than in himself; his eye is continually drawn to the margins of society, and to those whose lives are most in danger of being forgotten or erased. A powerful collection.” – James Arthur, author of The Suicide’s Son

“John Wall Barger’s poems are deadly serious and absolutely precise about the world in upheaval, in desire and its excess, in love and pornography, in political protest and ecological catastrophe, in the affirming flame sought but not found. Uncompromising, riveting, a kick in the conscience and the unconscious, a wake up call even at this late point in the evening, the world about to go dark, Smog Mother is written with an infinitely sad and unforgettable pen.” – Indran Amirthanayagam, author of The Migrant States

"Moon Garden" by Ernest Hilbert in The Hudson Review