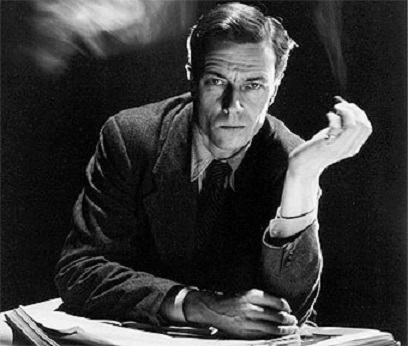 I see her against the pearl sky of Dublin
Before the turn of the century, a young woman
With all those brothers and sisters, green eyes, hair
She could sit on; for high life, a meandering sermon

(Church of Ireland) each Sunday, window-shopping
In Dawson Street, picnics at Killiney and Howth…
To know so little about the growing of one
Who was angel and maid-of-all work to my growth!

–Who, her sister dying, took on the four-year
Child, and the chance that now she would never make
A child of her own; who, mothering me, flowered in
The clover-soft authority of the meek.

Who, exiled, gossiping home chat from abroad
In roundhand letters to a drift of relations –
Squires’, Goldsmiths, Overends, Williams’ – sang the songs
Of Zion in a strange land. Hers the patience

Of one who made no claims, but simply loved
Because that was her nature, and loving so
Asked no more than to be repaid in kind.
If she was not a saint, I do not know

What saints are…Buying penny toys at Christmas
(The most a small purse could afford) to send her
Nephews and nieces, she’d never have thought the shop
Could shine for me one day in Bethlehem splendour.

Exiled again, after ten years, my father
Remarrying, she faced the bitter test
Of charity– to abdicate in love’s name
From love’s contentful duties. A distressed

Gentle woman housekeeping for strangers;
Later, companion to a droll recluse
Clergyman brother in rough-pastured Wexford,
She lived for all she was worth– to be of use.

She bottled plums, she visited parishioners.
A plain habit of innocence, a faith
Mildly forbearing, made her one of those
Who, we were promised, shall inherit the earth

…Now, sunk in one small room of a Rathmines
Old people’s home, helpless, beyond speech
Or movement, yearly deeper she declines
To imbecility– my last link with childhood.

The battery’s almost done: yet if I press
The button hard– some private joke in boyhood
I teased her with– there comes upon her face
A glowing of the old, enchanted smile.

So, still alive, she rots. A heart of granite
Would melt at this unmeaning sequel, Lord,
How can this be justified, how can it
Be justified?

C. Day Lewis , born in Ireland in 1904, was Poet Laureate from 1968 until his death in May 1972. He published many volumes of poetry, as well as essays, critical studies, translations of Virgil and Valéry, and twenty crime novels written under the pseudonym Nicholas Blake. A popular broadcaster, lecturer and reader of poetry, he was Clark Lecturer at Cambridge (1946), Professor of Poetry at Oxford (1951-56), Charles Eliot Norton Professor at Harvard (1964-65), and Compton Lecturer at Hull University (1968). He was awarded a CBE and was made a Companion of Literature by the Royal Society of Literature.

0
Ernest Hilbert Reviews The Bookseller of Florence: The Story of the Manuscripts That Illuminated the Renaissance at the Wall Street Journal