Ernest Hilbert Reviews The Bookseller of Florence: The Story of the Manuscripts That Illuminated the Renaissance at the Wall Street Journal 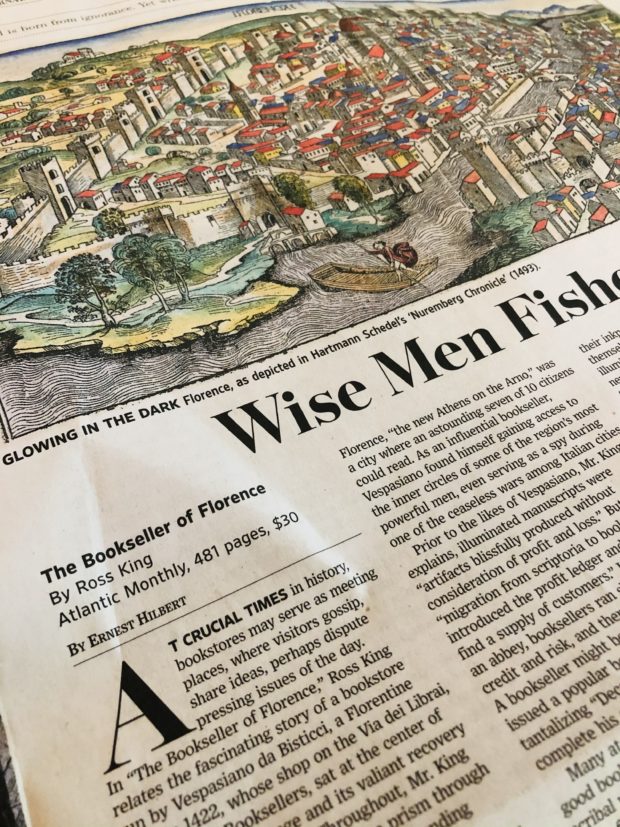 The Bookseller of Florence Review: Manuscripts and Medicis

At crucial times in history, bookstores may serve as meeting places, where visitors gossip, share ideas, perhaps dispute pressing issues of the day. In “The Bookseller of Florence,” Ross King relates the fascinating story of a bookstore run by Vespasiano da Bisticci, a Florentine born in 1422, whose shop on the Via dei Librai, or Street of Booksellers, sat at the center of Florence’s golden age and its valiant recovery of ancient knowledge. Throughout, Mr. King holds up Vespasiano’s life as a prism through which to survey the vast and astounding events of 15th-century Italy. After all, Vespasiano’s most important clients included the “Renaissance type that combined cultural refinement and religious piety with obscene ostentation and murderous savagery,” who nonetheless dreamed of life “free from the bustle of civilization,” with “plenty of leisure for writing books and, even more, for collecting them.”

Vespasiano was a prodigy, a man of humble origins with virtually no schooling who became extraordinarily learned. He familiarized himself with the Roman classics while he apprenticed as a teenager in the muscular and grimy labors of bookbinding. He sold his first book at age 20. By 23, he was serving the powerful Medici family as procuratore, or agent, seeking out the most desirable books of the period for their libraries, such as Pliny the Elder’s “Natural History,” Cicero’s “Speeches” and Quintilian’s “Institutio Oratoria” (of sure value to anyone hoping to hold his own in public debates).

Before long, Vespasiano established a bookshop selling beautifully made manuscripts of newly fashionable Roman classics for prosperous clients. He was well placed: Florence, “the new Athens on the Arno,” was a city where an astounding seven of 10 citizens could read. As an influential bookseller, Vespasiano found himself gaining access to the inner circles of some of the region’s most powerful men, even serving as a spy during one of the ceaseless wars among Italian cities.

Prior to the likes of Vespasiano, Mr. King explains, illuminated manuscripts were “artifacts blissfully produced without consideration of profit and loss.” But the “migration from scriptoria to bookshops introduced the profit ledger and the need to find a supply of customers.” Unlike monks in an abbey, booksellers ran shops that involved credit and risk, and therefore deadlines. A bookseller might be ruined if a competitor issued a popular book—like Boccaccio’s tantalizing “Decameron”—before he could complete his own run.

Many at the time griped of a scarcity of good booksellers and the poor quality of most scribal works, riddled as they were with errors and often sloppily executed. Demand for beauty and accuracy was high. In answer, Vespasiano’s books were copied from exemplars, the most accurate known versions, obtained at great risk and expense across transalpine Europe by manuscript hunters. Accordingly, Vespasiano’s bookshop became a destination for scholars; even those from warring factions found themselves shoulder to shoulder while leafing through his books. To fill his many commissions, Vespasiano hired not only copyists but also artists to illuminate and adorn the leaves, including a gifted hermit who worked contentedly from his hillside cave. In time Vespasiano would be known as “prince of Florentine booksellers,” and even “king of the world’s booksellers.”

Read on at the Wall Street Journal.

0
Congratulations to Rebecca Wisniewski, Winner of the 2021 Poetry Out Loud Delaware State Championship with Poems by Ernest Hilbert, Emily Dickinson, and Ada Limón