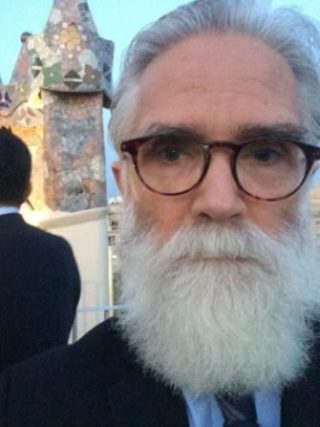 An ice-blue Sikorsky helicopter pivots
over Pier 11 where I’m lazily engaged
with a bad translation of Brodsky, the poet’s
own into the language of his staged
departure. OK, exile. More emphatic.
Wow. The Russian’s slants resemble those
of the precarious dragon ferry boats
that dornacker-dornacker overhead and nose
down to a painted X as Staten Island floats
into the quintessential automatic
I am here. Or in my office in the eaves,
or in the Lackawanna Terminal. I’m thinking
about Ithaca, and rolling up my sleeves.
It’s stifling here. And lately I’ve been drinking
like a fish and sleeping in the attic.

Rick Mullin’s poetry has appeared in various journals, including American Arts Quarterly, Epiphay, Measure, The Raintown Review, The New Criterion, and Rabbit Ears: Poems About TV. His new collection, Transom, was published in March by Dos Madres Press, Loveland, Ohio. Other books include Huncke (Seven Towers, Dublin, Ireland, 2010), Soutine (Dos Madres Press, 2012), and Sonnets from the Voyage of the Beagle (Dos Madres Press, 2014). He is a painter and a business journalist working in the financial district in Manhattan.

"Dance of the Sugar Plum Fairy" by Anton Yakovlev