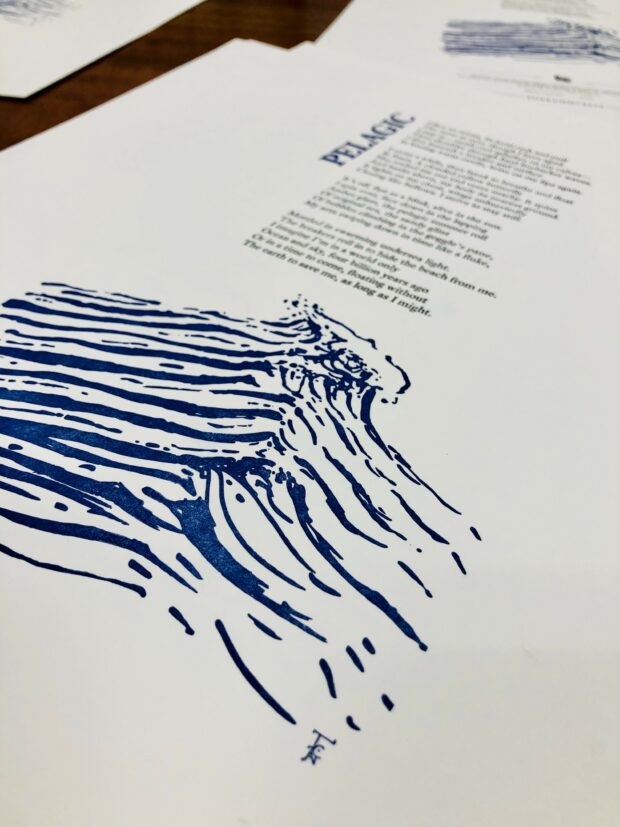 Tollund Press in Essex County, Massachusetts, announces their second broadside, my poem “Pelagic” with art by Franco Salas-Borquez. My poems “Last Rites” and “Pelagic” have served admirably as “Guinea pigs” for the newly-founded press. This one is a beauty. It is available in three formats on two different kinds of stock, limited to sixty total copies signed.

These look great on the wall and make a fitting gift for anyone who loves poetry or swimming, or, as in my case, both. I think the press has done a wonderful job with the poem.

The press is selling the broadside in three different formats.

$85 for copies in hand-made hard maple frames with dark blue matting. Click here to buy. FRAMED COPIES ARE NOW SOLD OUT (THOUGH THE PUBLISHER MAY MAKE MORE IN THE FUTURE)

$100 for the rarest, one of six sealed in bottles, three of which have been placed into the Gulf Stream and one of which is with the author, leaving only two for sale. Click here to buy. THE BOTTLED SERIES IS NOW SOLD OUT.

“I FACE AN OCEAN, ITS LURID RUSH AND PULL”: LIMITED-EDITION SIGNED BROADSIDE FROM TOLLUND PRESS

Limited-edition letterpress broadside of Ernest Hilbert’s swimming poem “Pelagic,” including artwork created by Chilean artist Franco Salas-Borquez, signed by the poet, sixty total copies, six on smaller paper bottled—three released into the Gulf Stream in the spring of 2022—fifty-four larger format unbottled, six copies hors de commerce. Three sealed “poems in a bottle” were stowed aboard The Charlotte, a J120, 40-foot sloop, and borne along the course of the 2022 June Newport-Bermuda Race, known as the “Thrash to the Onion Patch,” which takes places largely in the Gulf Stream, where the bottles were set loose from the vessel.

The cresting wave art was created by Franco Salas-Borquez, a Paris-based Chilean painter and sculptor born into a seafaring family on the island of Chiloé. Borquez’s dramatic large-scale seascapes capture primordial sense of elemental terror in the chaos of storms and fierce currents. The line-drawing was commissioned and created for this broadside. It was digitized and then transferred to a photopolymer plate for printing.

The six broadsides in bottles are printed on 100% cotton text stock (118 gsm, 8 pt) and the fifty-four unbottled broadsides on 100% cotton 1-ply cover stock (318 gsm, 20 pt). All sheets printed on a 5,950-pound Original Heidelberg GT. The poem and its title are set in Mathew Butterick’s font Equity, an elegant variation of Times, originally designed for clarity and legal use. The colophon is set in Orpheus, designed by Kevin King and Patrick Griffin after “late 1920s designs by Walter Tiemann, who had an impressive talent for combining classic Roman proportions and Art Deco sensibilities.”

The broadside features the official blue-ink Nemean Lion chop stamp on the reverse, dated in Hilbert’s hand. The numbering in felt-tip pen on the limitation was accomplished by Ann Drourr. The poem first appeared in The Hopkins Review, Volume 13, Number 2, Spring 2020 and again in the book Storm Swimmer, UNT Press, 2023. The broadside includes a description card printed on the Heidelberg. Grains of sand collected by the poet in the Florida Keys was added by the printer to the six bottles. Grains of Himalayan salt were also added in order to absorb humidity and moisture from the corks. The bottles were corked using a Grifo Italian Floor Corker. The bottles were sealed with navy blue sealing wax manufactured by Blended Waxes, Inc. Vice Commodore Richard L. West of the Stamford Yacht Club released the bottled poems into the gulf stream during the June 2022 Newport-Bermuda Yacht Race. Two earlier strikes of the broadside on different paper were destroyed as the inking was deemed insufficiently even. It is the second broadside issued by the press.

"Too Late" by Gerald Stern