Ernest Hilbert’s “Last Rites” Appears as the First Installment of the Tollund Press Poetry Broadside Series (with Art by Ian!) 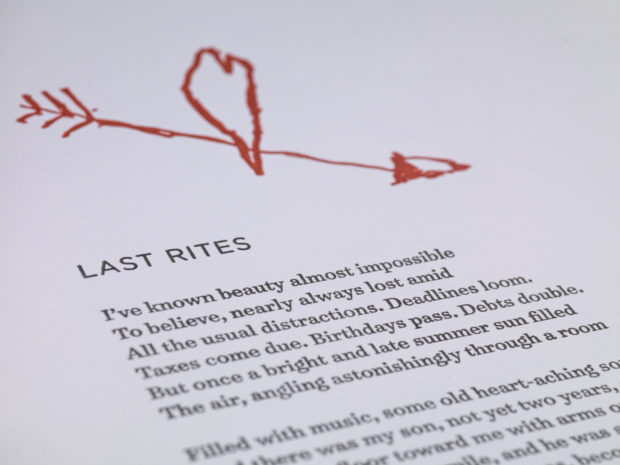 My poem “Last Rites,” which first appeared in The Hudson Review, Autumn 2019, Volume LXXII, No. 3, appears as the first letterpress broadside from the newly founded Tollund Press, accompanied by artwork by my son, Ian. It is issued in a series of 24 numbered and signed copies (four copies hors de commerce). They are available from the press for $35 plus shipping (which varies according to destination). Visit Tollund Press to purchase.

The publisher obtained a 5,950-pound Original Heidelberg Platen Press and refurbished it over the course of a year, having missing parts machined locally or shipped from as far away as China. The finished press at work is an awesome and somewhat terrifying machine to behold.

The poem and artwork are printed on 12″ x 18″, 118-lb. 100%-cotton cover stock on an Original Heidelberg Platen Press manufactured in Germany by the fabled Heidelberger Druckmaschinen. It is set in Hoefler & Co’s Surveyor (designed by Tobias Frere-Jones in homage to the characteristic form of lettering on engraved maps) and Gotham (a sans-serif with geometric structure designed by Tobias Frere-Jones with Jesse Ragan and inspired by mid-twentieth-century architectural signs).

I’ve known beauty almost impossible
To believe, nearly always lost amid
All the usual distractions. Deadlines loom.
Taxes come due. Birthdays pass. Debts double.
But once a bright and late summer sun filled
The air, angling astonishingly through a room

Filled with music, some old heart-aching song,
And there was my son, not yet two years, coming
Across the floor toward me with arms outspread,
His face big with a smile, and he was so strong
And new, unworried blue eyes, becoming
Ever giddier, unbalanced, lunging ahead,

Hoping to fly in that warm light with his father,
To hug me as if for very life, and I wished I could
Stay there always lifting him, laughing, and such
Light linger as if we’re still together,
And I will tell you it hurt it was so good,
And I know I’ve had that. I had that much.

While visiting the press in Essex County, Massachusetts, the author’s son was asked by the publisher to “draw anything” that came to his mind. The resulting artwork, known as “Ian’s Arrow,” was first accomplished in pencil, then inked over with ballpoint pen and then further widened with marker by the young artist, who was 5 years old at the time. The image was transferred to a photopolymer plate for printing.

The press itself is housed in its own building on the property.

"Those Boys" by John Wall Barger