Ernest Hilbert Writes about Books in the Wall Street Journal 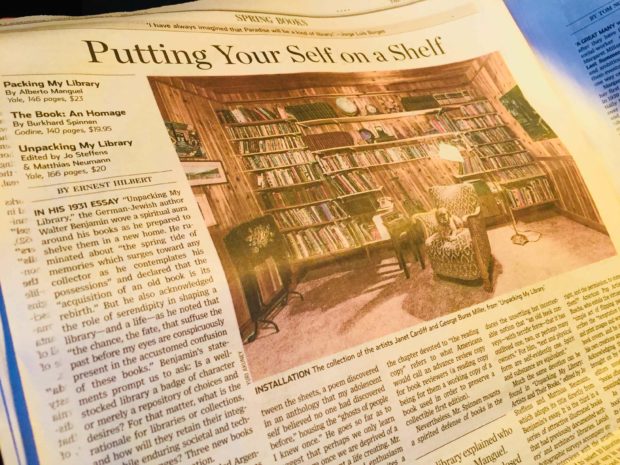 I had a chance to review three new books about books for the Spring books insert at the Wall Street Journal. Check it out.

In his 1931 essay “Unpacking My Library,” German-Jewish author Walter Benjamin wove a spiritual aura around his books as he prepared to shelve them in a new home. He ruminated about “the spring tide of memories which surges toward any collector as he contemplates his possessions” and declared that the “acquisition of an old book is its rebirth.” But he also acknowledged the role of serendipity in shaping a library—and a life—as he noted that “the chance, the fate, that suffuse the past before my eyes are conspicuously present in the accustomed confusion of these books.” Benjamin’s statements prompt us to ask: Is a well-stocked library a badge of character or merely a repository of choices and desires? For that matter, what is the rationale for libraries or collections, and how will they retain their integrity while enduring societal and technological changes? Three new books take up this conversation.

In 2015, the widely traveled Argentine writer Alberto Manguel was appointed director of Argentina’s national library, a post once held by Jorge Luis Borges. (In a gesture that now appears fateful, when Borges’s eyesight began to fail he asked Mr. Manguel, then a teenager, to read aloud to him.) Not long before his appointment, Mr. Manguel had found himself faced with a bookish dilemma that verged on a psychological crisis. After carefully filling an ancient presbytery near France’s Loire Valley with a personal library of no fewer than 35,000 volumes, he was compelled to pack them all up again in preparation for a move to a New York apartment.

Read on over at the Wall Street Journal.

0
"God the Eater" by Stevie Smith