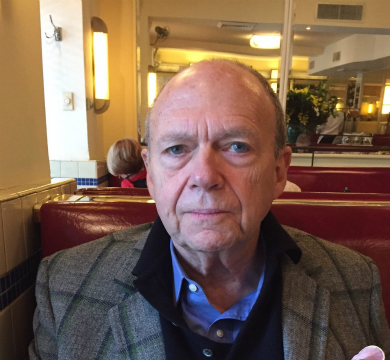 Huntsman indeed is gone from Savile Row,
And Mr. Hall, the head cutter.
The red hunt coat cut for me was utter
Red melton cloth thick as a carpet, cut just so.
One time I wore it riding my red Ducati racer— what a show!—
Matched exotics like a pair of lovely red egrets.
London once seemed the epitome of no regrets
And the old excellence one used to know
Of the chased-down fox bleeding its stink across the snow.

We follow blindly, clad in coats of pink,
A beast whose nature is to run and stink.
I am civilized in my pink but
Civilized is about having stuff.
The red coats are called “pinks.” Too much is almost enough.
No one knows why they are. I parade in the air
With my stuff and watch the disappearing scut
Of a deer. I am civilized but
Civilized life is actually about too much.

I parade in the air
And wait for the New Year
That then will, then will disappear.
I am trying not to care.
I am not able not to.
A short erect tail
Winks across the winter field.
All will be revealed.
I am in a winter field.

They really are everywhere.
They crawl around in one’s intimate hair.
They spread disease and despair.
They rape and pillage
In the middle of Sag Harbor Village.
They ferry Lyme disease.
The hunters’ guns bring them to their knees.
In Paris I used to call the Sri Lankan servants “Shrees.”
I am not able not to.

Winter, spring, Baghdad, fall,
Venery is written all
Over me like a rash,
Hair and the gash,
But also the Lehrer NewsHour and a wood fire and Bach.
A short erect tail
Winks across the killing field.
All will be revealed.
I am in a killing field.

I remember the chasse à courre in the forest in the Cher.
I remember the English thoroughbreds ridden by the frogs.
I remember the weeping stag cornered by the dogs.
The stag at bay in the pond literally shed a tear.
A hunt servant in a tricorn hat waded out to cut its throat.
Nelson Aldrich on his horse vomited watching this.
The huntsman’s heraldic horn sounded the hallali.
The tune that cuts off the head. L’hallali!
Back to the château to drink the blood. L’hallali!

I am in Paris being introduced at Billy’s,
1960, avenue Paul-Valéry.
One of her beautiful imported English Lillys or Millys
Is walking around on her knees.
It is rather like that line of Paul Valéry’s.
Now get down on all fours, please.
We are ministers of state and then there is me chez Billy.
Deer garter-belt across our field of vision
And stand there waiting for our decision.

Our only decision was how to cook the venison.
I am civilized but
I see the silence
And write the words for the thought balloon.
When the woods are the color of a macaroon,
Deer, death is near.
I write about its looks in my books.
I write disappearing scut.
I write rut.

The title is Kill Poetry,
And in the book poetry kills.
In the poem the stag at bay weeps, literally.
Kill poetry is the hallali on the avenue Paul-Valéry.
Get rid of poetry. Kill poetry.
Label on a vial of pills. Warning: Kill kill kill kills.
Its title is Kill Poem,
From the Book of Kills.
The antlered heads are mounted weeping all around the walls.

John F. Kennedy is mounted weeping on the wall.
His weeping brother Robert weeps nearby.
Martin Luther King, at bay in Memphis, exhausted, starts to cry.
His antlered head is mounted weeping on the wall.
Too much is almost enough, for crying out loud!
Bobby Kennedy announces to a nighttime crowd
That King has died, and then quotes Aeschylus, and then is killed.
Kill kill kill kills, appalls,
The American trophies covered in tears that deck the American halls.

0
Ernest Hilbert Writes about Books in the Wall Street Journal