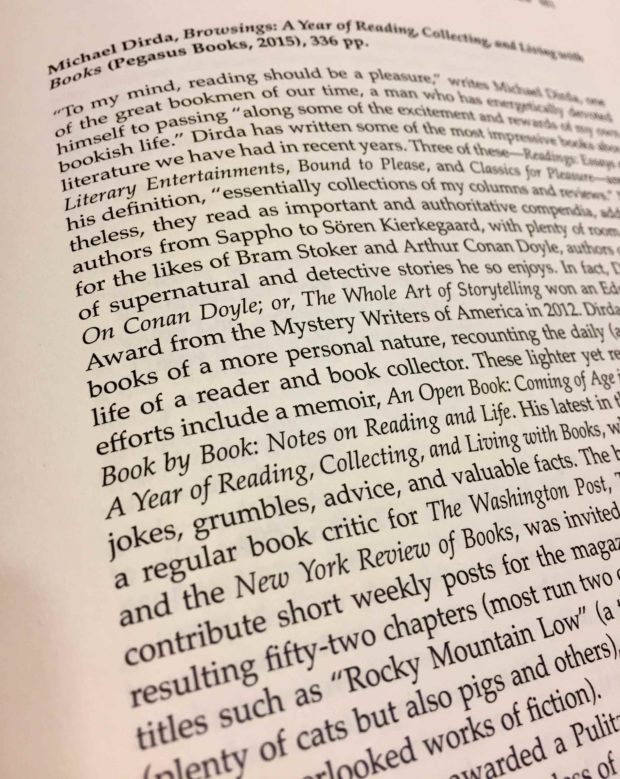 My review of Michael Dirda’s latest book, Browsings: A Year of Reading, Collecting, and Living with Books, appears in the new issue of The Hopkins Review, Summer 2017, New Series 10.3, along with new poetry by Andrew Motion, Rachel Hadas, Wendy Videlock, and Dora Malech, fiction by Stephen Dixon and Yaniv Moore, an excerpt from a translation of Lorca’s Blood Wedding by Sarah Arvio, and much, much more. Check it out. Follow the link to subscribe to The Hopkins Review.

“To my mind, reading should be a pleasure,” writes Michael Dirda, one of the great bookmen of our time, a man who has energetically devoted himself to passing “along some of the excitement and rewards of my own bookish life.” Dirda has written some of the most impressive books about literature we have had in recent years. Three of these—Readings: Essays and Literary Entertainments, Bound to Please, and Classics for Pleasure—are, by his definition, “essentially collections of my columns and reviews.” Nonetheless, they read as important and authoritative compendia, addressing authors from Sappho to Sören Kierkegaard, with plenty of room left over for the likes of Bram Stoker and Arthur Conan Doyle, authors of the kind of supernatural and detective stories he so enjoys. In fact, Dirda’s book On Conan Doyle; or, The Whole Art of Storytelling won an Edgar Allan Poe Award from the Mystery Writers of America in 2012. Dirda also publishes books of a more personal nature, recounting the daily (and often lonely) life of a reader and book collector. These lighter yet remarkably learned efforts include a memoir, An Open Book: Coming of Age in the Heartland, and Book by Book: Notes on Reading and Life. His latest in this vein is Browsings: A Year of Reading, Collecting, and Living with Books, which blends anecdotes, jokes, grumbles, advice, and valuable facts. The book began when Dirda, a regular book critic for The Washington Post, Times Literary Supplement, and the New York Review of Books, was invited by the American Scholar to contribute short weekly posts for the magazine’s blog for one year. The resulting fifty-two chapters (most run two or three pages) bear intriguing titles such as “Rocky Mountain Low” (a thrilling tirade), “Bookish Pets” (plenty of cats but also pigs and others), and “Castles in Space” (fascinating yet overlooked works of fiction).

Dirda, who was awarded a Pulitzer Prize for distinguished criticism in 1993, describes himself as less of a critic—“I don’t possess that kind of analytic mind”—than a “bookman, an appreciator, a cheerleader for the old, the neglected, the marginalized, and the forgotten,” adding that “on sunny days I may call myself a literary journalist.” It is in this role that he brings us good news, that “the world is full of wonderful stories, heartbreakingly beautiful and witty poems, thrilling works of history, biography and philosophy,” commending us to them because they “make you laugh, or hug yourself with pleasure, or deepen your thinking, or move you as profoundly as any experience this side of a serious love affair.” If the life of the mind required an advocate, Dirda would be on retainer. After all, it is hard to argue with his well-worn conviction that “we don’t read for high-minded reasons. We read for aesthetic, emotional, and intellectual excitement.” This attitude is hardly surprising from the author of Classics for Pleasure, a title which contains two words not often comfortably found together. A lively allusiveness runs throughout and brightens the book. Keats and Shakespeare live in Dirda’s sentences. When he professes that he likes “a piece to sound as if it were dashed off in 15 minutes—even when hours might have been spent in contriving just the right degree of airiness sand nonchalance,” the reader registers under his sardonic tone the sentiments of W. B. Yeats’ “Adam’s Curse,” “Yet if it does not seem a moment’s thought, / Our stitching and unstitching has been naught.” The reader’s antennae quiver page to page with the sense that they have encountered what Dirda calls “another of my quirks—the buried allusion, the embedded quotation without any identification of the source.”

At times, Dirda conjures scenes like a novelist (he knows many who ply the trade), as when he illustrates his preference “simply to be surrounded by other people while I read or write.”

Years ago, when I was in graduate school, I took to polishing chapters of my dissertation late at night in a local McDonald’s. It should have been distracting, as truckers, prostitutes, and police officers dropped by after midnight for coffee or Big Macs. It wasn’t. I remember feeling astonishingly serene. . . .

Elsewhere, Dirda eagerly instructs us in the lore of tantalizing but largely forgotten volumes of supernatural fiction, fantastic tales, adventures stories, science-fiction sagas, many of them—in fact most of them—long since out of print. They hail from what Dirda calls “The Great Age of Storytelling,” which by his account took place between 1875 and 1930, when greatly increased literacy rates, along with newly efficient printing and distribution, made books available to an unprecedented number of readers before the rise of radio and television drama. As he revives interest in these authors, Dirda engages in one of the most important, and some might suggest truly heroic, tasks of the critic, performing a type of literary archaeology. He whets the reader’s appetite for dozens upon dozens of novels with such irresistible names as The Footsteps on the Ceiling and The Lunatic at Large.

Where does Dirda the great literary hunter track these obscure books? He regales us with accounts of expeditions to charity sales, book fairs, and, his greatest weakness, used bookstores. He describes the process by which the initial allure of these places gradually shades into an uncontrollable desire to move from one to the next—even as he feels he really ought to be sensible and return home—much as another kind of writer might describe progressing from bar to bar in a fugue state. He jokingly tells of his condition, known to those in the know as bibliomania:

Now this is bad, very bad. These days I can hardly step away from this desk and not find myself gravitating to a used-book store and pulling out my credit card. I can almost always justify my purchases as sensible, reasonable courses of action. All addicts do this. Still, those book outlays add up quite dramatically when the monthly Visa bill comes due.

Though the books he venerates tend to be unavailable except as increasingly rare books, he celebrates the growing trend of reprint houses devoted to rescuing lost works and making them once more available to the reading public. In the chapter “In Praise of Small Presses” he applauds Gasogene Books/Essex Press (“books by Arthur Conan Doyle or about Sherlock Holmes”), Ash-Tree Press (“ghost stories and weird tales”), and Hippocampus Press (“to H.P. Lovecraft what Gasogene is to Sherlock Holmes”), among others of this welcome new breed. I defy anyone to read Browsings without reaching for a notepad to begin enthusiastically scribbling lists of lately-discovered books to seek out.

Amid the endlessly amusing observations on literary themes, Dirda finds time for a red-blooded, old-fashioned rant, occasioned by the sort of travel that has for all of us come to be “a prolonged nightmare.” After a day of interminable and probably unnecessary delays on busses in the Rocky Mountains, he lets loose, pointing to “real suffering of elderly seniors and quite young children” and demanding they be told “the truth,” after which,

the Center’s personnel regarded me as a pitiable crank and dismissed my outrage as obvious insanity. But here is the strangest part of all: no one else came forth to utter a peep about our cattle-car experiences. I was shocked at how docile my fellow sufferers had become. Were they too beaten down to say anything? Had they come to accept such abusive behavior as the modus operandi for life in these United States?

It is a chilling and all too familiar thought.

While dispensing wisdom and displaying astounding erudition, Dirda can be counted on to be at once mordant and charmingly self-effacing. He tells us that “on any given day I’m likely to be working here at home, hunched over this keyboard, typing Great Thoughts and Beautiful Sentences—or so they seem at the time, like those beautifully flecked and iridescent stones one finds at the seashore that gradually dry into dull gray pebbles.” He stands before his amassed books and sighs, “perhaps my Beloved Spouse is right. While there’s definitely method to my madness, it may well be madness nonetheless.” At other times, Dirda can be touching, as when he describes a visit to his mother in a nursing home, where the “after-effects of a stroke have kept her wheelchair bound and rendered her right hand useless.” He remembers “once upon a time I sat in my mother’s lap, as she turned the pages of Golden Books and I gradually learned to read.” Today, they look over children’s books “before she puts them aside as gifts for her first great-grandchild.”

Browsings is a sustained ode to the pleasures of cultural immersion, acquisition, and appreciation, not only books but also vinyl albums, CDs, fine clothing, cuisine, art, and personally meaningful baubles and bibelots. These are the pleasures of the home, the study, the hearth. Dirda assures us, “where your treasure is, there will your heart be also,” summoning no less an authority than the bible, King James Version, of course. While turning these pages, the reader experiences the sensation of being comfortably ensconced in a book-filled room, one in which the volumes overflow the shelves, what Dirda refers to as “ziggurats of books in the bedroom and on the attic steps and on top of the piano . . .” While some might think the books a sign that he’s “no better than a hoarder with a houseful of crumbling newspapers,” he reminds us that books are much more purposeful than other objects, each a promise that the reader will one day enjoy the time and peace of mind to read them. Where one might see clutter, the critic sees “future projects, awaiting that time when the stars are right.” Dirda wields the truly rare ability to make books and the life of the reader not only appealing but downright enlivening. He likes to be serious while expending great reserves of talent and learning to have fun. How serious is Dirda about the fun he finds in books? He believes “heaven itself will resemble a vast used bookstore, with a really good café in one corner, serving coffee and Guinness and kielbasa to keep up one’s strength while browsing . . .” It certainly sounds like heaven, or perhaps the closest thing to it we can get given just a few hours and a few dollars to spare.

0
"An English Teacher" by Reed Whittemore

"An Afternoon at the Beach" by Edgar Bowers