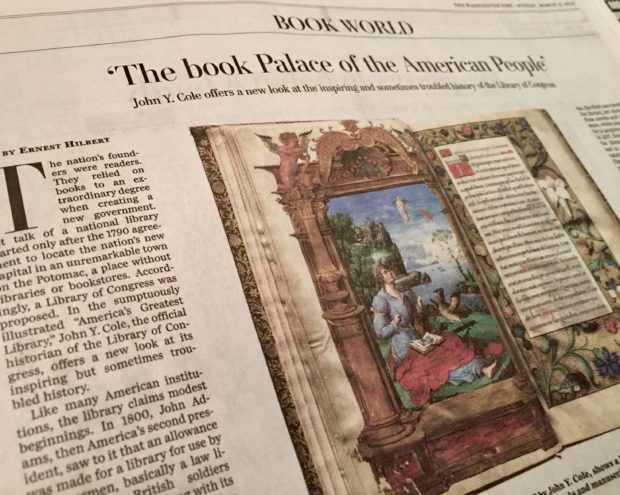 My review of a new history of the Library of Congress appears in today’s Sunday Washington Post. Check it out. I notice they altered my bio slightly to  make me a “dealer in rare books,” which sounds altogether too louche.

The nation’s founders were readers. They relied on books to an extraordinary degree when creating a new government. Yet talk of a national library started only after the 1790 agreement to locate the nation’s new capital in an unremarkable town on the Potomac, a place without libraries or bookstores. Accordingly, a Library of Congress was proposed. In the sumptuously illustrated “America’s Greatest Library,” John Y. Cole, the official historian of the Library of Congress, offers a new look at its inspiring but sometimes troubled history.

Like many American institutions, the Library claims modest beginnings. In 1800, John Adams, then America’s second president, saw to it that an allowance was made for a library for use by congressmen, basically a law library. After British soldiers burned the Capitol along with its library during the War of 1812 — an act fiercely denounced by Thomas Jefferson as “British Vandalism” — Congress agreed to make a new start with the purchase of Jefferson’s polymathic library on the grounds that “there is in fact no subject to which a member of Congress may not have occasion to refer.” Cole explains that this decision would have a lasting effect on the identity of the fledgling institution, as Jefferson’s “concept of universality” became the rationale for its “comprehensive collecting policies.”

"The Woman Turns Herself into a Fish" by Eavan Boland