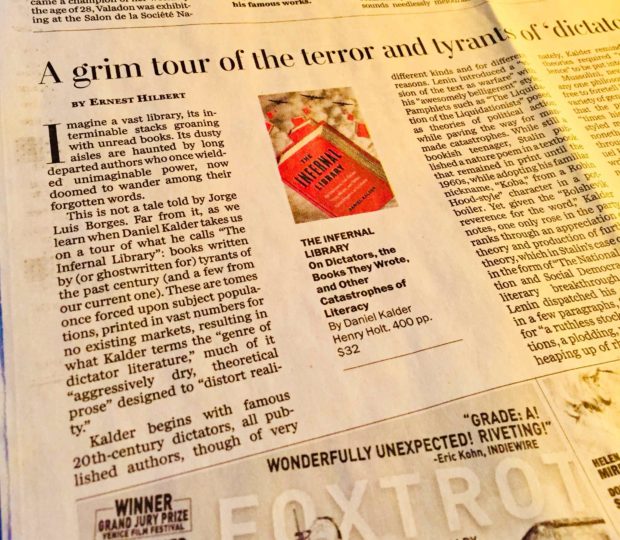 Of all the genres one might imagine, dictator literature, books written by or on behalf of despots, must be among the most curious and troubling. I review Daniel Kalder’s book The Infernal Library: On Dictators, the Books They Wrote, and Other Catastrophes of Literacy for the Washington Post newspaper.

Imagine a vast library, its interminable stacks groaning with unread books. Its dusty aisles are haunted by long departed authors who once wielded unimaginable power, now doomed to wander among their forgotten words.

This is not a tale told by Jorge Luis Borges. Far from it, as we learn when Daniel Kalder takes us on a tour of what he calls The Infernal Library: books written by (or ghostwritten for) tyrants of the past century (and a few from our current one). These are tomes once forced upon subject populations, printed in vast numbers for no existing markets, resulting in what Kalder terms the “genre of dictator literature,” much of it “aggressively dry, theoretical prose” designed to “distort reality.”

Kalder begins with famous 20th-century dictators, all published authors, though of very different kinds and for different reasons. Lenin introduced a “vision of the text as warfare” with his “awesomely belligerent” style. Pamphlets such as “The Liquidation of the Liquidationists” posed as theories of political action while paving the way for man-made catastrophes. While still a bookish teenager, Stalin published a nature poem in a textbook that remained in print until the 1960s, while adopting his familiar nickname, “Koba,” from a Robin Hood-style character in a potboiler. Yet given the “Bolshevik reverence for the word,” Kalder notes, one only rose in the party ranks through an appreciation of theory and production of further theory, which in Stalin’s case came in the form of “The National Question and Social Democracy,” his literary breakthrough. While Lenin dispatched his opponents in a few paragraphs, Stalin opted for “a ruthless stockpiling of citations, a plodding, relentless, great heaping up of rhetoric.” Unfortunately, Kalder reminds us, such theories required “massive violence” to be put into practice.

"Ring The Bells Backward: Give Up The Gun" by Ray Bradbury