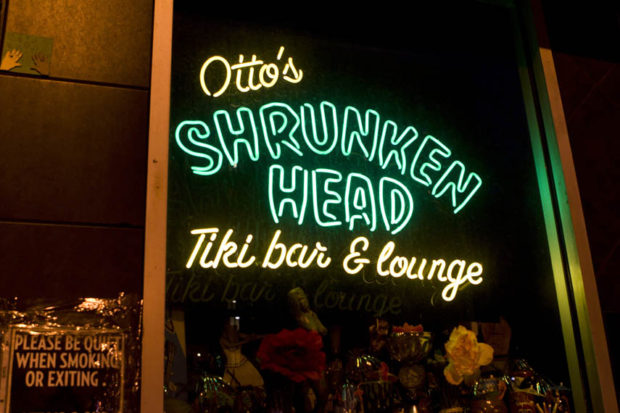 Come on out for a lazy Sunday afternoon Zombie, beer, or coffee and some new poetry at Otto’s Shrunken Head, declared one of New York City’s best venues for poetry.

Check out the Facebook event page to let us know if you’re coming. Ernest Hilbert’s debut poetry collection Sixty Sonnets (2009) was described by X.J. Kennedy as “maybe the most arresting sequence we have had since John Berryman checked out of America.” His second collection, All of You on the Good Earth (2013), has been hailed as a “wonder of a book,” “original and essential,” an example of “sheer mastery of poetic form,” containing “some of the most elegant poems in American literature since the loss of Anthony Hecht.” His third collection, Caligulan (2015), has been called “brutal yet beautiful,” defined by “pleasure, clarity, and discipline,” “tough-minded and precise,” filled with a “stern, witty, and often poignant music,” “a page-turner in a way most poetry books can never be,” and “an honest book for dishonest times.” Caligulan was selected as the winner of the 2017 Poets’ Prize. Austin Allen’s first poetry collection, Pleasures of the Game (Waywiser Press, 2016), won the 11th Anthony Hecht Poetry Prize. His poetry has recently appeared in The Yale Review, 32 Poems, Southwest Review, The Missouri Review, and has been featured on Verse Daily. His criticism appears frequently via Poetry Foundation. He lives and teaches in Cincinnati.

0
"Austen’s Ring and Shelley’s Heart: Our Fascination with Literary Relics" by Ernest Hilbert in Plume

Ernest Hilbert, a "Lovely Man Who Deals in Rare Books," Merits a Cheese-Related Shout-Out on the TLS Podcast