“Austen’s Ring and Shelley’s Heart: Our Fascination with Literary Relics” by Ernest Hilbert in Plume 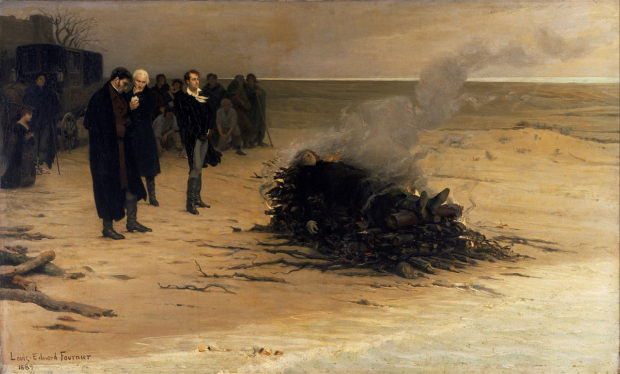 My latest essay, “Austen’s Ring and Shelley’s Heart: Our Fascination with Literary Relics,” appears in this month’s Letters and Comments section at Plume. I may be delivering a talk based on it over at the Rosenbach Library and Museum sometime in the future. Here is an extract:

[. . .] The ages of Romanticism and Victorianism saw renewed interest in relics, though of literary rather than scriptural or magical significance. Edward John Trelawney, friend of Percy Bysshe Shelley, was the first to identify the poet’s body after he drowned in a squall while sailing his schooner, The Don Juan (after his friend Byron’s poem), in July 1822. Trelawney arranged for Shelley’s cremation and oversaw the ceremony (the fabled occasion was captured by Louis Édouard Fournier in his 1889 painting, “The Funeral of Shelley,” which hangs in Liverpool’s Walker Art Gallery). After the immolation, Trelawney removed from the ashes what he claimed to be Shelley’s still-intact heart, miraculously preserved from the fire (“What surprised us all was that the heart remained entire”).

As fantastical as this sounds, in 1955 Arthur Norman claimed in The Journal of the History of Medicine, that Shelley may have possessed “a progressively calcifying heart . . . which indeed would have resisted cremation as readily as a skull, a jaw or fragments of bone.” Whatever the reasons for its permanency, the heart was given to Shelley’s wife, Mary, author of Frankenstein (Daisy Hay explains that “an undignified quarrel broke out between Mary and [Leigh] Hunt about who should keep Shelley’s heart,” Hunt only giving it to Mary after “Jane Williams persuaded him that Shelley would have been horrified at the idea of his friends quarreling over one of his organs”; Hay also suggests that “the cherished relic was probably Shelley’s liver”). A year after Mary’s death, in 1851, numerous artifacts were retrieved from her desk including a journal she had shared with Percy Bysshe Shelley, a copy of “Adonais,” his elegy for John Keats, and the heart, which would one day be buried with their only son, Sir Percy Florence Shelley, 67 years after his father drowned in the Ligurian Sea. The famous heart would later inspire Pre-Raphaelite William Michael Rossetti, brother of Dante Gabriel Rossetti, to pen a poem on the subject, fittingly titled “Shelley’s Heart” and dedicated to Trelawney, beginning “Trelawny’s hand, which held’st the sacred heart, / The heart of Shelley, and hast felt the fire . . .” If this weren’t enough, Rossetti writes of Trelawney having given him “a fragment of Shelley’s charred skull” and even a sofa “Shelley had procured for himself in Pisa,” what he declared “a simple but tasteful construction” and one of his “most valued possessions.” The exhibition “Shelley’s Ghost: The Afterlife of a Poet,” curated by Stephen Hebron for the Bodleian Library at Oxford University in 2010 (reinstalled at the New York Public Library in 2012), included alongside manuscripts and letters the poet’s “gold and coral baby rattle” as well as a “necklace owned by the Shelley family with locks (lockets) of P.B. and Mary Wollstonecraft Shelley’s hair.”

Shelley is not alone among nineteenth-century poets in being sought by such collectors. As recently as 2008, Sotheby’s sold a lock of Lord Byron’s hair, “dark brown with some white strands,” which was “cut from his head after his death at Missolonghi, coiled and tied with a pink ribbon, with an accompanying wrapper inscribed in the hand of Byron’s intimate friend John Cam Hobhouse.” It hammered at £3,000 over an estimate of £1,500 to 2,000. For comparison, a lock of Robert Browning’s hair, “contained in a silver, heart-shaped memorial locket, the cover incised ‘R.B. 12-12 89’ (the date of his death),” fetched £220 in 1978, not a bad price for the time. One American dealer offered for sale the vest Hemingway wore in Spain during “the dangerous summer” of 1959, alongside the moccasins Papa sported that summer, given by him to his friend and physician Dr. George Saviers. These articles of Hemingway interest are perhaps only a small consolation to the collector who thinks longingly about Hemingway’s legendary lost suitcase, which contained the young, unpublished author’s manuscripts. In 1922, Hemingway’s first wife Hadley left the suitcase unattended in a train compartment at the Gare de Lyon while she bought an Evian. Upon her return, she found the suitcase gone. Bereft, the young Hemingway wrote to Ezra Pound that after the theft “all that remains of my complete works are three pencil drafts of a bum poem which was later scrapped.”

Read on over at Plume.