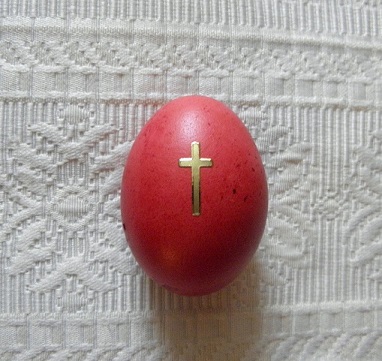 Dyeing the Easter eggs, the children talk
Of dying. Resurrection’s in the air
Like the whiff of vinegar. These eggs won’t hatch,
My daughter says, since they are cooked and dead,
A hard-boiled batch.

I am the children’s blonde American mother,
Who thinks that Easter eggs should be pastel—
But they have icon eyes, and they are Greek.
And eggs should be, they’ve learned at school this week,
Blood red.

We compromise, and some are yellow, or blue,
Or red and blue, assorted purples, mauves,
But most are crimson, a hematic hue
Rubbed to a sheen with chrism of olive oil;
They will not spoil,

As Christian death is a preservative,
As Jesus trampled death and harrowed Hell.
The kids’ palms are incarnadine and violet.
A mess! Go wash your hands! They wash their hands,
Punctilious as Pontius Pilate.

A.E. Stallings is the author of four books of poetry: Like, which is a 2019 Pulitzer Prize Finalist in Poetry; Archaic Smile, which won the Richard Wilbur Award; Hapax, which won the Poet’s Prize and the American Academy of Arts and Letters’ Benjamin H. Danks Award; and Olives. She has also published verse translations of Hesiod’s Works and Days and Lucretius’s The Nature of Things. Stallings is a 2011 Guggenheim Fellow and a 2011 MacArthur Fellow. She lives in Athens, Greece.

This poem was originally published by Literary Matters and appears in Like.

0
"I Have A Vast Traumatic Eye" by Tennessee Williams