Ever wonder what would have happened if Civil War era Paleontologists discovered an entrance to a lost world of living dinosaurs and the North had the very bad idea of capturing  them to use as weapons of mass destruction during the Civil War?  Okay, probably not, but Virginia resident Mark Clein did.  Had he been a Northerner he said he would have had changed the uniform color to be the Rebs not the Yanks as the victims of this dino-soldier massacre vignette,  but in the end, it was all about the art . . . and a bit of making fun of Bible Creationists who insist that people and dinosaurs co-existed at some point in history.

I would recommend going there but I’ve just learned that a recent fire damaged most of the exhibits—what is this with the South and epic fires?  However, Mark Clein promises it will indeed rise again to reopen in 2013 and be better than ever.

Here is an article about  Dinosaur kingdom in Natural Bridge, VA as it was in it’s gory glory. 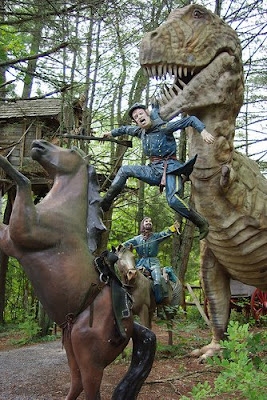 "Living Together" by James Matthew Wilson