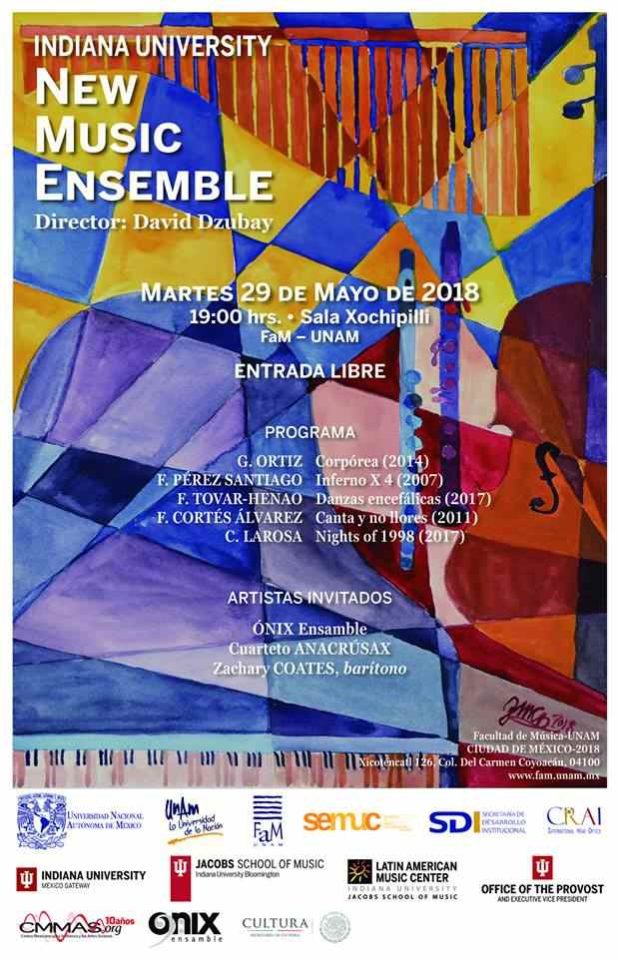 Composer Christopher LaRosa recently set to music my poem “Nights of 1998,” from my book All of You on the Good Earth, for a baritone accompanied by sinfonietta. The piece premiered on Thursday, March 8th, 2018 in Auer Hall, Jacobs School of Music, Indiana University at Bloomington, performed by the Vera Quartet, with baritone soloist Zachary Coates, directed by David Dzubay. You may visit the original post here.

Now, “Nights of 1998” will be performed again in Mexico City by UNAM (Universidad Nacional Autónoma de México) on May 29th (I may attend the performance). You can watch a short video that includes an interview with Chris LaRosa in which he explains “the poem is basically about a raucous night in New York, filled with lots of partying and people and music, and it’s just a wild party with the ensemble and the singers having a great time.”

Here is Christopher LaRosa’s commentary on the piece.

“Nights of 1998” sets Ernest Hilbert’s poem of the same title, from his collection All of You on the Good Earth. The poem depicts a debaucherous downtown party in SoHo, Manhattan, replete with copious alcohol, drugs, and music. The scorching summer night spins out of control to a sudden breaking point—the partygoers fall apart, and during the early morning hours of his comedown, the first-person protagonist experiences a (perhaps slightly hallucinatory) existential afterglow. The boundless energy, apparent authenticity, and evocative dramatic arc of Ernest’s poem drew me in.

The poem describes a diegetic music, as the baritone struggles to “play a record…and the needle shrieks like scraped chalk through the speakers,” which cleverly intersects with the non-diegetic music suggested by his racing mental state, as well as the implied sonic backdrop of the wild partygoers and the hectic downtown streets of New York City. The poem’s sonic environment and the baritone’s varying mental states seem perfectly suited for sinfonietta, which I view at once as a motley crew of instrumental characters, as well as an ensemble capable of intense energy and agility, deafening cacophony, and gorgeous color. As such, I use the ensemble in various dramatic guises to describe the party’s wild sonic setting, the diegetic music, and the baritone’s extreme mental states.

I cast the various instruments of the sinfonietta as individual characters participating in the revelry, chattering away. As more and more instruments enter, or arrive, the texture occasionally boils over, submerging the baritone soloist in cacophony of ever-increasing intensity. The baritone’s scraping record sounds in the overpressure bowed strings, the New York traffic blares through the glissing brass, the diagetic music’s energy pulses through the chaotic up and down of the drum set’s hi-hat. Throughout the piece, the sinfonietta assumes the baritone’s drug-altered mental state—the music races ahead as the baritone’s dopamine levels surge, ecstatic bursts flash across the tutti ensemble, stuttering metric irregularity and tempo modulations distort the perceived flow of time, and suspended passages seem to stop time completely while the baritone makes simple but genuinely profound observations of the summer night’s beauty. The poem begins at a boiling point; nevertheless, the baritone continues to turn up his record player, party, and mental state. So the music begins up, and I only continue to turn the ensemble up, and up, and up—until we can’t go back.