“4AM Cab Ride” by Ernest Hilbert 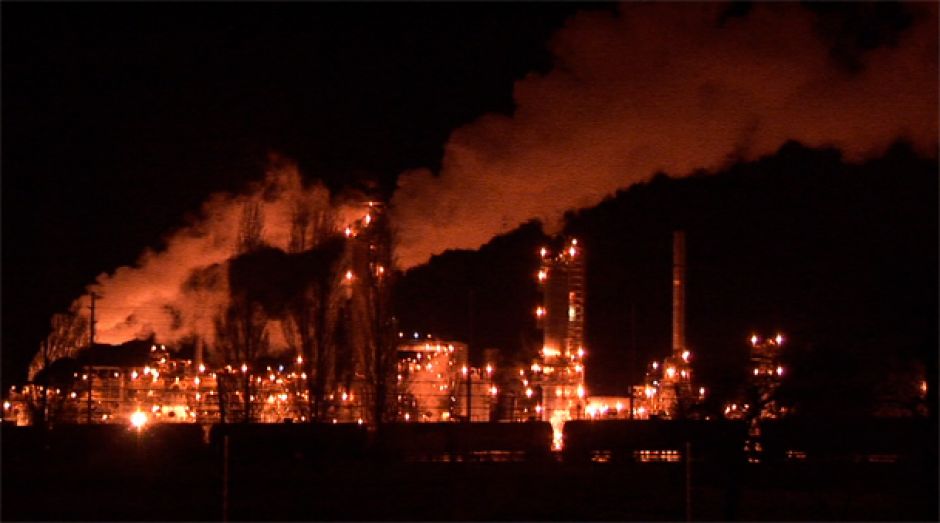 You watch the cold bristles and scrawled ghost sheen
Of a full moon on a black bay beside
Refineries corroded by weather.
You want to believe there are old, unseen
Things out there that have long since learned to hide
From us and survive with all we prefer
To ignore or forget in those moments before
The fertile disorder of day reconnects
Us to our public lives. But now, a moon’s dry chalk
Marble rolls down the night’s drowned throat and lures
The eyes from moon to moon—cruel white collects
Like snow or ash, like milk, mist, or cut stalk,
Gathering of mown meadows; as it must
The heart fills, rasping, as a silo, with dust.

Ernest Hilbert’s newest collection, All of You on the Good Earth, explores the bizarre worlds of twenty-first century America first glimpsed in his debut, Sixty Sonnets, which X.J. Kennedy hailed as “maybe the most arresting sequence we have had since John Berryman checked out of America” and “whose dark harmonies and omnivorous intellect remind the reader of Robert Lowell’s,” according to Adam Kirsch. Critics have called Hilbert’s poems “at once ironic, dark, and witty,” containing the “full range of human types and stories, and nearly the whole breadth of what the sonnet can do,” “spectacular,” “both seriously tough-minded and wryly self-chiding,” concluding that “the only other poet who plies risk against reward so deftly is Pound.” Poet and critic David Yezzi salutes Hilbert as “a twenty-first-century beatnik in Elizabethan ruff.”

All of You on the Good Earth guides the reader through chambers occupied by visionary gravediggers and spaced-out movie stars, frenzied dropouts, sullen pirates, and unrelenting stalkers, noble war correspondents and cornered dictators, unlucky drunks and supercilious scientists, impatient goddesses and sad sea monsters, self-indulgent denizens of Plutonian strip-clubs and earnest haunters of ancient ruins, the infamous Rakewell in TriBeCa and sea nymph Kalypso in a beach house at the Jersey shore, characters wandering an America demoralized by economic decline. These poems contain fasts and feasts, laments and love songs, histories, fantasies, and elegies, the amusing and heartbreaking debris of life on this world, all the while recalling Seneca’s dictum, non est ad astra mollis e terris via (“the road from the earth to the stars is not easy”).

Hilbert has written poems of superb lyricism. It’s hard to think of another poet with such range, and indeed with such brilliant delivery. Beauty, trash, exaltation, and humor are contained in his capacious and exacting forms. These are, quite simply, original and essential poems. – Justin Quinn, author of American Errancy: Empire, Sublimity, and Modern Poetry and Gathered Beneath the Storm: Wallace Stevens, Nature and Community

Hilbert is one of our best rhymers since Robert Frost, and his poems have been compared by superb poets to those of John Berryman and Robert Lowell. We haven’t had a poetry like his—both seriously tough-minded and wryly self-chiding—to enjoy and mull over for a long time. – Alice Quinn, executive director of the Poetry Society of America and editor of Elizabeth Bishop’s Edgar Allan Poe & The Juke-Box: Uncollected Poems, Drafts, and Fragments

“Genes clarify the genius and the freak / And prove we descend from a feral band,” Ernest Hilbert writes in “Outsider Art,” and there is no mistaking the “feral” appetite and intensity of these poems, or the bitter depths of experience they sometimes explore. What makes All of You on the Good Earth such a rare collection, however, is the way Hilbert unites that raw energy with elegant and original language, creating a style that sounds like no one else’s. – Adam Kirsch, senior editor at The New Republic and author of The Modern Element: Essays on Contemporary Poetry

1
"Lovecraft: Fear of the Unknown": An Excellent Feature-Length Documentary on the Life and Works of H.P. Lovecraft