“Your Heart You Sing Of”: Ernest Hilbert Reads from the “Wandering Rocks” Chapter of Ulysses for Bloomsday 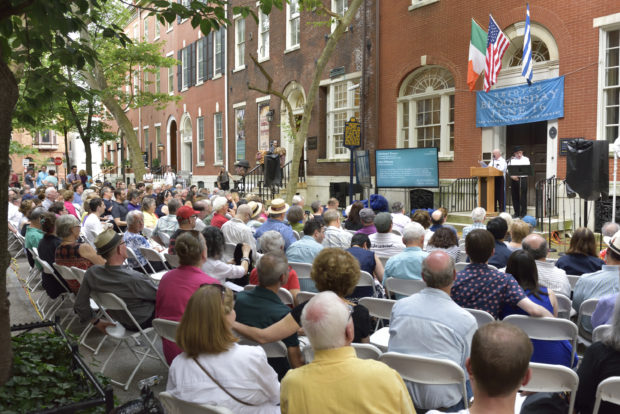 “Your heart you sing of. I between them. Where? Between two roaring worlds where they swirl, I. Shatter them, one and both. But stun myself too in the blow. Shatter me you who can.”

Hey, Philly, Bloomsday is on a Sunday this year, father’s day no less! I’ll be reading from the “Wandering Rocks” chapter of James Joyce’s Ulysses for the Rosenbach Museum & Library’s Annual Bloomsday, Sunday, June 16th. The day-long reading of Ulysses includes “literati, artists, public figures, and familiar personalities from Philadelphia and beyond.” I’ll be going on around 2:10PM.

After two years of what may be considered at the very least a gentle form of hazing—during which I was compelled to read from the maddeningly maddening “Circe” chapter of James Joyce’s masterpiece, and then from the equally embarrassing and bewildering “Sirens” chapter—I’ve been given a comparatively tame one this year, quite a lyrical one too, the “Wandering Rocks.” It is a relief to have reached this sunny upland, though I may be tempting fate by publicly stating this!

Bloomsday is the day the world celebrates Leopold Bloom’s fictional journey through the streets of Dublin, as imagined in James Joyce’s epic Ulysses. Lauded as the greatest novel of all time, Ulysses has been called everything from masterfully moving to hilariously obscene. The Rosenbach’s rollicking day-long reading of Ulysses will feature literati, artists, public figures, and familiar personalities along with musical performances that will bring the book to life.

Bloomsday is free and open to everyone. Joyce enthusiasts and novices alike can drop by any time during the day to listen to the reading, relax in our Bloomsday Beer Garden with local food trucks, and enjoy free admission to The Rosenbach. In the event of rain Bloomsday will be moved to The Philadelphia School at 25th & South Streets.

Hope to see you there!

0
Orson Welles Reads "Song of Myself VI" by Walt Whitman

"The Lost Pilot" by James Tate