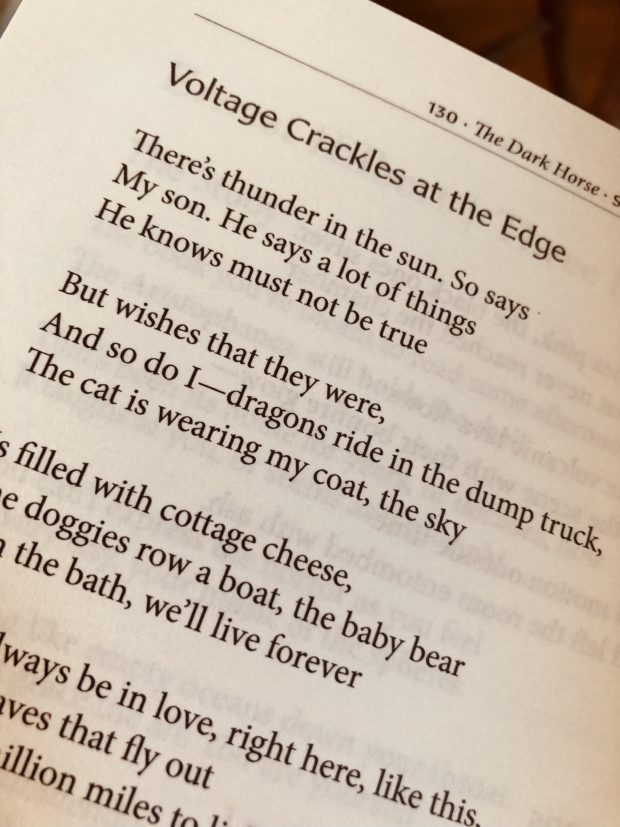 Three of my poems, “The Study,” “Bound Demons,” and “Voltage Crackles at the Edge,” appear in the latest issue of The Dark Horse, Summer 2021, Issue 43. Click here to learn more about the issue or to subscribe (highly recommended).

I worked on “Voltage Crackles at the Edge” for several years, though I was never able to bring it to completion, even in an open-ended way. When reading it aloud, I found myself choked up, hardly able to get through, as happened when I attempted to share it during a reading at Shakespeare & Company in Philadelphia two years ago (I made it to the end, but there was a long break while I composed myself). I suppose the subject is simply too “close” to allow me any real control over it. When Gerry Cambridge, inimitable editor of The Dark Horse, mentioned he was “on the fence” about the poem, I invited him to work with me on it. He displayed exemplary tact and intelligence in doing so, and in a few days we were able to finally bring a sense of completion to the poem.

“Voltage Crackles at the Edge”

There’s thunder in the sun. So says
My son. He says a lot of things
He knows must not be true

But wishes that they were,
And so do I—dragons ride in the dump truck,
The cat is wearing my coat, the sky

Is filled with cottage cheese,
The doggies row a boat, the baby bear
Is in the bath, we’ll live forever

And always be in love, right here, like this,
With waves that fly out
Ninety million miles to light

Up the book we read together.
My son’s eyes are big. He says we have
To whisper or monsters might come in.

He’s not afraid of ghosts. For him,
They’re only things that can’t be seen.
And what is to be feared in that?

He thinks that he’s a ghost when hiding
Behind the window curtain, though
He cannot resist the giggling fits

That give him away and back to us again.
We’re ghosts. We are. You’re right,
My little one. We’re ghosts,

And when we’re only ghosts
I know we’ll stay in love, like now,
Because we lived by love,

And took from love our magic lives—
Objects bending time and space,
Alone with what we love.

Note: The poem’s title derives from the final line of a poem written by Paul Siegell and dedicated to me, “We’ve Come for Your Killer Kick Drum,” from his 2018 collection Take Out Delivery.

"At the Carnival" by Anne Spencer