“The Last Mystery” by Jon Stallworthy 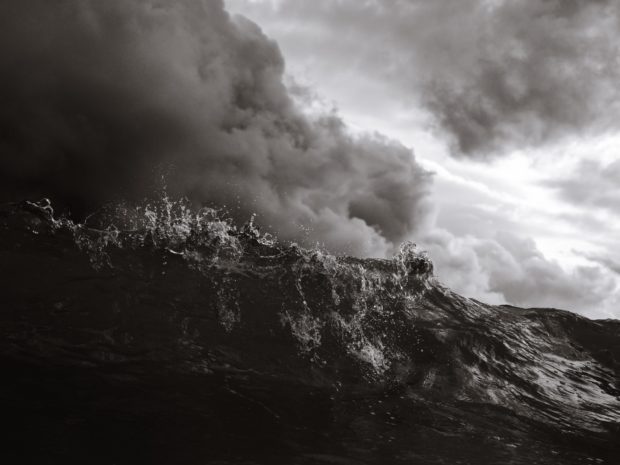 He knew that coastline—no man better—
knew all its rocks and currents, like the veins
and knuckles on the brown back of his hand;
the leap-frog rollers and tall tons that batter
boat-rib and man-rib into grains
of indistinguishable sand:
he had known them all since he could stand.

A shanty was his earliest lullaby,
the beach his back-yard, flotsam all his toys.
He was admitted to the mystery
of tides; read the wind’s writing on the sky;
could out-sail, out-dive, out-swim boys
older by half; was known to save
many from the saber-toothed, man-eating wave.

Knowing so well the temper of that coast,
and all subaqueous hazards of the sea,
what voice, thought, impulse lugged him from his ale
(when every flag was fighting with a mast
and waves kicked bollards off the quay)
to match his Lilliputian sail
against the wrestling muscles of the gale.

Only the lemming knows; his friends knew only
boat-rib and man-rib littered the long shore
many tides after. I declare he fell
like a pearl-dazzled diver through the sea
to that last mystery on its floor:
whose is the heart-beat under the swell,
the hand that turns the whirlpool and the shell?

Born in London, editor, critic, and poet Jon Stallworthy earned his B.Litt and MA at the University of Oxford, where he won the Newdigate Poetry Prize. A reviewer for Critical Quarterly praised his first collection, The Astronomy of Love (1961), with the observation that Stallworthy shows “a gift few poets possess, and which all poets wish for—the ability to strike out a memorable and epigrammatic line which is at once simple and deeply disturbing.” He published numerous volumes of poetry, including Rounding the Horn: Collected Poems (1998), Body Language (2004), and [The Apple Barrel] [Survivors’ Song: From Maldon to the Somme, which is listed by the Poetry Foundation as a book of poetry, is a actually a distinguished work of literary and historical criticism], as well as a memoir, Singing School: The Making of a Poet (1998). Stallworthy’s poems often employ conventional forms in their sophisticated examinations of war, England, and family. Biography courtesy of the Poetry Foundation.