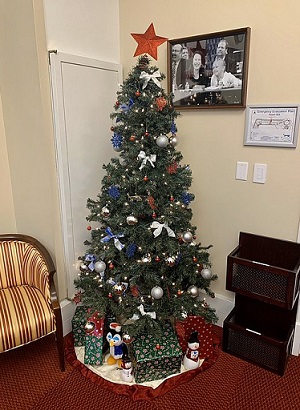 Put out the lights now!
Look at the Tree, the rough tree dazzled
In oriole plumes of flame,
Tinselled with twinkling frost fire, tasseled
With stars and moons—the same
That yesterday hid in the spinney and had no fame
Till we put out the lights now.

Hard are the nights now:
The fields at moonrise turn to agate
Shadows as cold as jet;
In dyke and furrow, in copse and faggot
The frost’s tooth is set;
And stars are the sparks whirled out by the north wind’s fret
On the flinty nights now.

So feast your eyes now,
On mimic star and moon-cold bauble;
Worlds may wither unseen,
But the Christmas Tree is a tree of fable,
A phoenix in evergreen,
And the world cannot change or chill what its mysteries mean
To your heart and eyes now.

The vision dies now
Candle by candle: the tree that embraced it
Returns to its own kind,
To be earthed again and weather as best it
May the frost and the wind.
Children, it too had its hour—you will not mind
If it lives or dies now.

C. Day Lewis , born in Ireland in 1904, was Poet Laureate from 1968 until his death in May 1972. He published many volumes of poetry, as well as essays, critical studies, translations of Virgil and Valéry, and twenty crime novels written under the pseudonym Nicholas Blake. A popular broadcaster, lecturer and reader of poetry, he was Clark Lecturer at Cambridge (1946), Professor of Poetry at Oxford (1951-56), Charles Eliot Norton Professor at Harvard (1964-65), and Compton Lecturer at Hull University (1968). He was awarded a CBE and was made a Companion of Literature by the Royal Society of Literature.

0
"The Cultivation of Christmas Trees" by T. S. Eliot

"A Christmas Hymn" by Richard Wilbur