“The Battle of COVFEFE Hill” by James Feichthaler 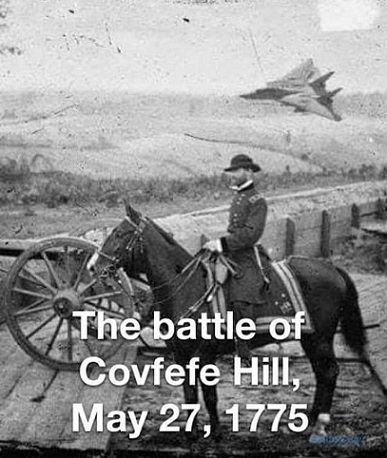 Excerpt from The Rise of the COVFEFE

Privacy’s dead! we thought you’d like to know,
Big Broski’s in the sky, on every corner;
What Orwell prophesized is coming true
In most respects, from Brooklyn to the border.
Don’t be alarmed, but we prob’ly know the order
You placed at Macy’s for your twins’ new bed sets,
Or heard you having phone-sex through our headsets.

Which begs the question: what do we all do
With so much time on our elitist hands?
Well, when COVFEFE isn’t watching you
(Or dropping Mother Bombs in foreign lands),
We’re breaking bread with some of our best friends.
Last week, we had a night out with The Russians;
Great cover band! Kim Jong was on percussions.

That night was fooking nuts! After the band
Played a sweet version of “Back in the U.S.S.R.,”
Putin got up, though he could barely stand,
And started singing songs about a czar
Who ruled for eight long years; but every slur
(That made its way into the almost sensible)
Hit way too close to home, was reprehensible.

Pitchers of Smirnoff went around the bar
As fast as you could say “Baryshnikov!”
But it was clear — though some would say the roar
(That came when Putin finished) was all love —
That the vibe that night was just a little off
And forced to some degree. So, we’ve made plans
To do it all again at Kim Jong Un’s.

For this year’s 4th, we’ll stage a reenactment
Of Washington’s famed trek across the pond,
To recognize his glorious entrapment
Of redcoat airports, low on fuel, outgunned.
Back then, there was no place for him to land
His fleet of jets; so when he saw the British,
He rammed their ramparts like a whore that’s Finnish.

George ransacked London, stormed through Normandy
And battle rapped a Moorish prince from Spain!
With just one leg, hopped down to Italy
And fed his troops cold s’ghettis from a can;
Which gave them life, before they hit Japan
With everything they had at Hiroshima,
Then Ubered home through Europe, back to FEMA.

Then, at The Battle of COVFEFE Hill,
Airsick and ailing, with their Space Force grounded,
George and his men encountered friction still
From alien troops; until a trumpet sounded,
And Brian Williams charged in with the wounded
Who perished at 51 and Kitty Hawk.
So many casualties! Those prawns would gawk

In disbelief, as ghostly soldiers met them
With heavenly hellfire at the dawn’s first light!
It took a single horn to resurrect them
From years of sleep, two wars to make things right,
As the cavalry from World News Tonight —
Made up of rag-tag writer journeymen
And camera crews that never fired a weapon —

Charged up the hill, with a hundred ghosts at most,
And rolled the garrison of Martians there!
Their fort was sacked in minutes; though the cost
Was twelve Sam Adams kegs and one light beer,
Which no one missed. It wasn’t even fair!
Those green-skinned butchers and some traitorous Brits
(Who brewed bad ale) were rightly blown to bits

And slaughtered like the migrant dogs they were,
As it was written in the prophecy:
“A false-toothed General, taking to the air
In 1775, to secure victory,
Will make America great as it can be,
And send the green ones home.” Which, to this day,
Is why we celebrate St. Patrick’s Day.

James Feichthaler‘s poetry has appeared in print and online journals in both the US and UK, many of his works being burned by The COVFEFE during the recent Area 51 raid. He is the host of The Dead Bards of Philadelphia, a poetry reading series that occurs every 4th Thursday of the month at The Venice Island Performing Arts Center in Manayunk, PA. You can follow James on Twitter @forrealist_poet and find The Dead Bards of Philadelphia on Instagram and Facebook.

0
"Among Women" by Marie Ponsot