“The Arctic Ox (or Goat)” by Marianne Moore 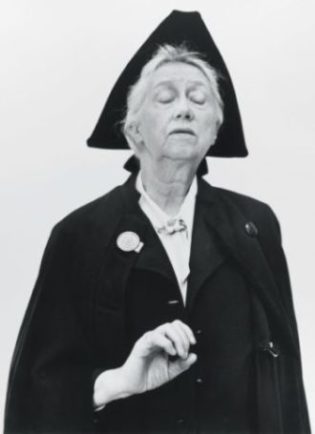 Derived from “Golden Fleece of the Arctic,’ by John J. Teal, Jr., who rears musk oxen on his farm in Vermont, as set forth by him in the March 1958 issue of the Atlantic Monthly.

To wear the arctic fox
you have to kill it. Wear
qiviut—the underwool of the arctic ox—
pulled off it like a sweater;
your coat is warm; your conscience, better.

I would like a suit of
qiviut, so light I did not
know I had it on; and in the
course of time, another
since I had not had to murder

the “goat” that grew the fleece
that made the first. The musk ox
has no musk and it is not an ox—
illiterate epithet.
Bury your nose in one when wet.

It smells of water, nothing else,
and browses goatlike on
hind legs. Its great distinction
is not egocentric scent
but that it is intelligent.

Lying in an exposed spot,
basking in the blizzard,
these ponderosos could dominate
the rare-hairs market in Kashan and yet
you could not have a choicer pet.

They join you as you work;
love jumping in and out of holes,
play in water with the children,
learn fast, know their names,
will open gates and invent games.

While not incapable
of courtship, they may find its
servitude and flutter, too much
like Procrustes’ bed;
so some decide to stay unwed.

whereas these scarce qivies,
with golden fleece and winning ways,
outstripping every fur-bearer—
there in Vermont quiet—
could demand Bold Ruler’s diet:

Mountain Valley water,
dandelions, carrots, oats—
encouraged as well by bed
made fresh three times a day—
to roll and revel in the hay.

Suppose you had a bag
of it; you could spin a pound
into a twenty-four-or-five-
mile thread—one, forty-ply—
that will not shrink in any dye.

If you fear that you are
reading an advertisement,
you are. If we can’t be cordial
to these creatures’ fleece,
I think that we deserve to freeze.