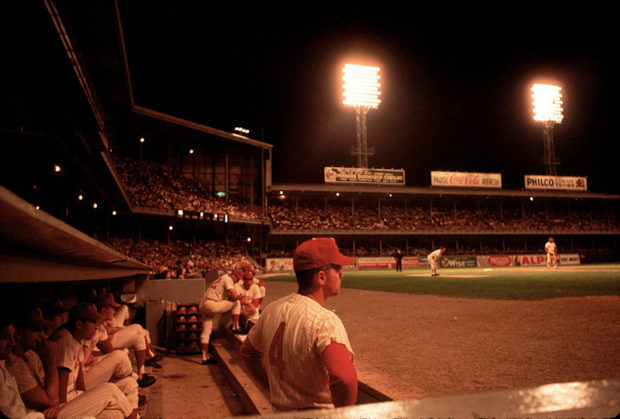 In Memory of Harry Kalas

On the front step my Grandpop strained to hear
Harry and Whitey call the Phillies’ game
from a crackling Philco hung on the wrought-iron railing.
He’d grind his teeth and move a toothpick left and right
the way that on-deck players swung at air,
a rhythm to wait for Harry’s baritone
and Whitey’s softer quips between the crowd
noises and vendor calls. He seemed to wait
on possibilities that hung like pop flies.
Gramps would tisk at strikeouts, whistle for homers,
and often blurt “About damn time!” or “Bum!”
And all around the neighborhood were men
from other families catching the baseball game
that had glued Harry’s voice on the night air,
a hundred Gramps or Uncle Jacks on steps
or kitchen chairs—out front and sipping Schmidt’s
and dipping Reisman pretzel sticks in blobs
of mustard in between their puffed Pall Malls.
Once, for a Fourth of July double-header,
my Father packed the kids, Grandpop, and Harry’s
radio voice into the station wagon
and off we went to South Philadelphia.
Though young and drowsy, we would hear that night
how Harry, Whitey, Dad, and Grandpop harmonized
like weed-thick lots of crickets where we played
halfies. It seemed that frequencies increased
their strength on the cool and rushing air that hummed
through open windows down Delaware Ave. We thumped
past railroad tracks and stopped beside a dark
meat-packing plant a few short blocks from the Vet.
We perched on the roof rack in our bed clothes,
our hair slicked-back, and heard Old Harry call
the bottom of the 9th. When midnight turned
the dashboard clock, the stadium had dimmed.
The flowery fireworks thundered, bloomed, and wilted
above the factories, above the voices
echoed off city walls and deep inside
attentive ears that since that summer night
have filled with lesser wins and greater losses.

David Livewell grew up in Philadelphia and won the 2012 T.S. Eliot Award for Poetry for Shackamaxon (Truman State University Press). He is now at work on a second collection.

You can also purchase at Amazon.

1
AoYotGE for National Poetry Month at the Cambridge Public Library

"In Praise of Diversity" by Phyllis McGinley