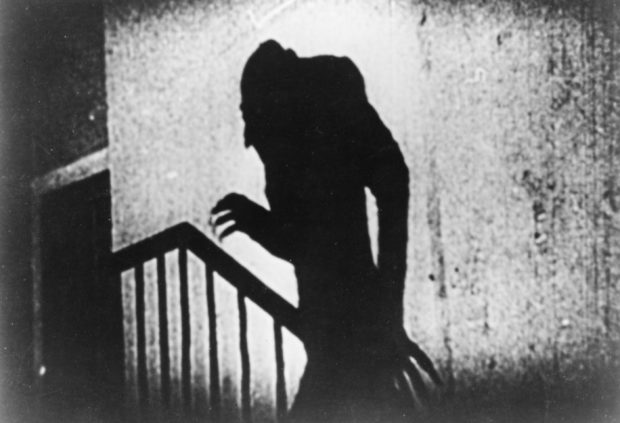 The evening of Wednesday, January 31st will be a full moon, a perfect night to screen the classic horror film Nosferatu (subtitled Eine Symphonie des Grauens, A Symphony of Horror, though this is generally dropped by Anglophone viewers). The 1922 German Expressionist film, directed by F. W. Murnau, is rightly considered by many the finest and most disturbing of all vampire films. The actor Max Schreck (his last name means “fright” in German!) lends a genuinely creepy and unforgettable presence to Count Orlok, Murnau’s stand-in for Count Dracula (Bram Stoker’s widow was litigious and known to be protective of the Dracula story, which caused the German film company to alter the characters and story enough to avoid being sued). Of course the “symphony” of the title is purely visual, in the Expressionist tradition, since the film was released in the silent era. However, like all silent films, it would have been accompanied by live music, most often an organ housed in a movie hall. As a result, it is nearly, though not entirely, impossible for a modern viewer to experience the film it its original form.

This is where our friends at the Rosenbach Library come in.

The Rosenbach Museum and Library of Philadelphia is hosting a screening of the classic silent movie accompanied by the Wurlitzer organ (originally built to accompany silent films and now fully restored) in the Greek Room at the Wanamaker building, played by Frederick R. Haas. Our generous friends at the library even supply popcorn and hot chocolate to help take the chill off the bleak midwinter freeze. It is a fundraiser for the library, and VIP tickets to a champagne reception are also available.

You are invited to a screening of the cinematic masterpiece Nosferatu, a symphony of horror. Enjoy this classic silent film the way it was meant to be experienced: with the beauty and drama of live organ accompaniment. Film tickets include popcorn and hot chocolate to warm your hands when Nosferatu sends chills up your spine. For a more complete experience, join us for a reception that includes hors d’oeuvres and champagne as well as refreshments and reserved seating for the film.

This cinematic event will take place in Greek Hall, one of the original auditoriums in the iconic Wanamaker Building in Center City. Greek Hall boasts a 1929 Wurlitzer organ that has been restored to its original beauty by the Friends of the Wanamaker Organ. Unlike the massive Grand Court organ in the Wanamaker central atrium, the Greek Hall Wurlitzer was designed specifically to be used in movie palaces and has been updated to show films with organ accompaniment in the present day.

Why: Because it’s scary and cool, and it’s for a good cause, supporting one of Philadelphia’s most important cultural institutions

Who: Hopefully you (I will be there!)

How: For more information or to register, visit the Rosenbach Library’s website. This is an evening not to be missed. Hope to see you there!

"The Pool" by Helen Pinkerton