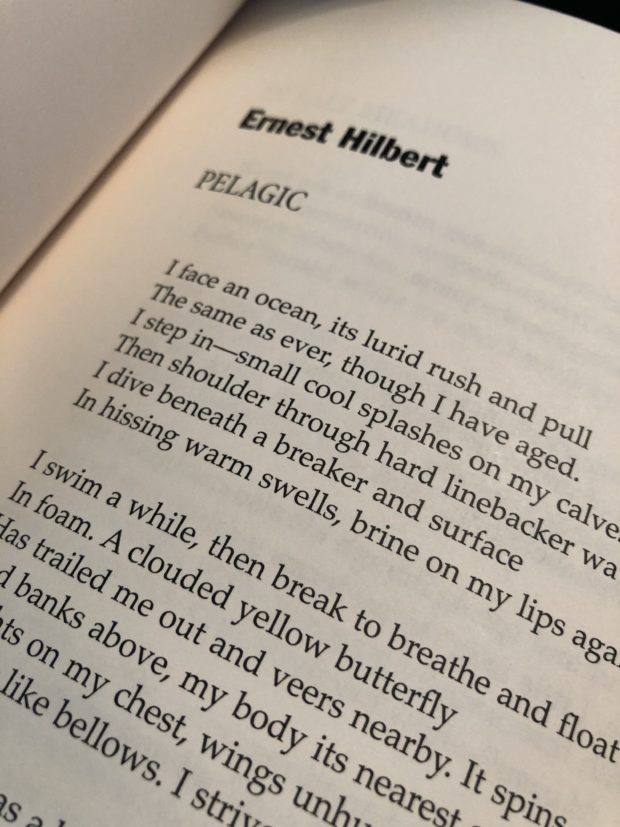 I face an ocean, its lurid rush and pull
The same as ever, though I have aged.
I step in—small cool splashes on my calves—
Then shoulder through hard linebacker waves.
I dive beneath a breaker and surface
In hissing warm swells, brine on my lips again.

I swim a while, then break to breathe and float
In foam. A clouded yellow butterfly
Has trailed me out and veers nearby. It spins
And banks above, my body its nearest ground.
It lights on my chest, wings unhurriedly
Closing like bellows. I strive to stay still.

It’s off, fast as a blink, alive in the sun.
I spin over, face down in the lapping
Amber glass, the pelagic summer roll
Of original sea, the sandy glint
Of bubbles climbing in the goggle’s pane,
My arm swiping down in time like a fluke,

Mottled in swarming undersea light.
The breakers roll in to hide the beach from me.
I imagine I’m in a world only
Ocean and sky, four billion years ago
Or in a time to come, floating without
The earth to save me, as long as I might.

0
"Saving What We Didn't Even Know Needed Saving": Ernest Hilbert Talks to Kevin Young in the New Issue of Fine Books & Collections

"Nibbled to Death by Ducks" by Kim Bridgford