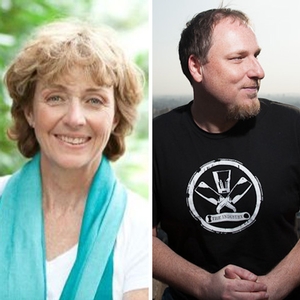 Catherine Staples is the author of The Rattling Window and Never a Note Forfeit. Her poems and reviews have appeared in Poetry, Kenyon Review, Gettysburg Review, The Southern Review, and The Massachusetts Review. Honors include the McGovern Prize, a fellowship from Sewanee Writers Conference, and a residency from the Tyrone Guthrie Centre in Annaghmakerrig, Ireland. She teaches in the English and Honors programs at Villanova University. Visit her author site here.

As in green, vert, a royal demesne
stocked with deer. Invert as in tipped
as a snow globe, going nowhere in circles
but not lost, not bereft as the wood
without deer, waiting for the white antlered
buck, or his does, or any slim yearling
to step along the berm, return. Vertigo
as in whirling round, swimming in the head,
unanchored by the long spring,
the horse cantering, the meadow dropping
like an elevator into the earth, falling
like Persephone through a crevice, a swiveling
crack, a loose screw, a lost way. Disordered
as in death lasts, my brother’s not coming back.
The spin of it continuous as in looking down
from height, and then it stops, the spinning
just slows, a chariot wheel stilled in grass.
The world is the same, but it isn’t. The tipped
views of trees when hanging from your knees.
The deer in twos and threes watching.

Ernest Hilbert is the author of three books of poetry, Sixty Sonnets, All of You on the Good Earth, and Caligulan, which was selected as winner of the 2017 Poets’ Prize. He lives in Philadelphia, where he works as a rare book dealer, opera librettist, and book reviewer for The Washington Post. Visit his author site here.

A hull becalmed between two storms, iced recess
And an expectant clearness between mist
And sleet, as if a brief peace had been won.

For soup, I rend the Christmas turkey carcass,
Yank slick, sturdy strands apart, though some resist
My hands as jellied fat, warmed, begins to run.

The hard world yields little we may possess.
Our newborn opens and fastens his fist.
Happy, we sort a small steading for our son.

Year’s end, and light’s begun to dispossess
The exhausted dark. I trace his small wrist.
May life, like light, be strong before it’s done.

0
"Heart to Heart" by Rita Dove