“Man on the Moon” by Stephen Edgar 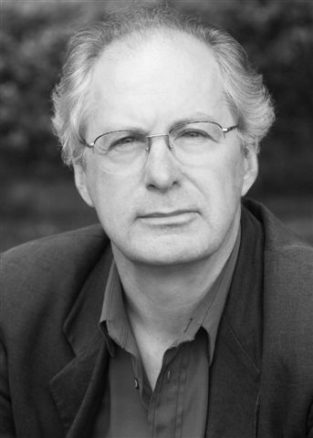 Hardly a feature in the evening sky
As yet— near the horizon the cold glow
Of rose and mauve which, as you look on high,
Deepens to Giotto’s dream of indigo.

Hardly a star as yet. And then that frail
Sliver of moon like a thin peel of soap
Gouged by a nail, or the paring of a nail:
Slender enough repository of hope.

There was no lack of hope when thirty-five
Full years ago they sent up the Apollo—
Two thirds of all the years I’ve been alive.
They let us out of school, so we could follow

The broadcast of that memorable scene,
Crouching in Mr Langshaw’s tiny flat,
The whole class huddled round the TV screen.
There’s not much chance, then, of forgetting that.

And for the first time ever I think now,
As though it were a memory, that you
Were in the world then and alive, and how
Down time’s long labyrinthine avenue

Eventually you’d bring yourself to me,
With no excessive haste and none too soon—
As memorable in my history
As that small step for man onto the moon.

How pitiful and inveterate the way
We view the paths by which our lives descended
From the far past down to the present day
And fancy those contingencies intended,

A secret destiny planned in advance
Where what is done is as it must be done
For us alone. When really it’s all chance
And the special one might have been anyone.

The paths that I imagined to have come
Together and for good have simply crossed
And carried on. And the delirium
We found is cold and sober now and lost.

The crescent moon, to quote myself, lies back,
A radiotelescope propped to receive
The signals of the circling zodiac.
I send my thoughts up, wishing to believe

That they might strike the moon and be transferred
To where you are and find or join your own.
Don’t smile. I know the notion is absurd,
And everything I think, I think alone.

Stephen Edgar is an Australian poet, editor, and indexer. He is the author of eleven books of poetry, including History of the Day (Black Pepper, 2009 ); The Red Sea: New & Selected Poems (Baskerville, 2012 ); Eldershaw (Black Pepper, 2013), which won the Colin Roderick Award for best Australian book of 2013; Exhibits of the Sun (Black Pepper, 2014 ), and Transparencies (Black Pepper, 2017). Edgar has been described by Clive James as standing out “among recent Australian poets for the perfection of his craft, a limitless wealth of cultural reference and an unmatched ability to make science a living subject for lyrical verse.”

Last One Out is Face Out at the London Review Bookshop