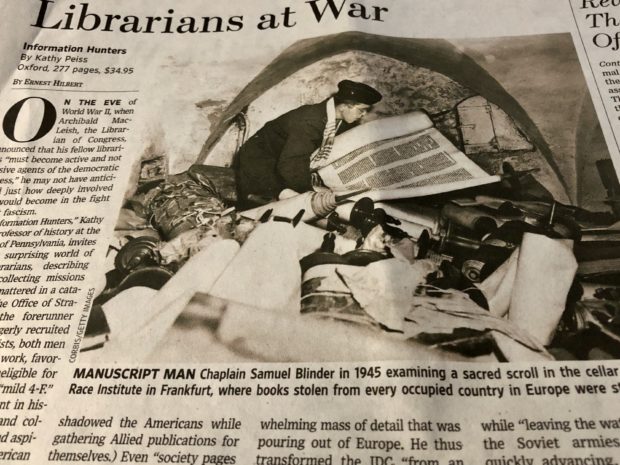 During World War II, librarians and archivists were eagerly recruited not only to gather intelligence from enemy media but also to collect and catalogue manuals and documents while embedded with units on the front lines.

On the eve of World War II, when Archibald MacLeish, the Librarian of Congress, announced that his fellow librarians “must become active and not passive agents of the democratic process,” he may not have anticipated just how deeply involved they would become in the fight against fascism.

In Information Hunters, Kathy Peiss, a professor of history at the University of Pennsylvania, invites us into the surprising world of wartime librarians, describing their “mass collecting missions and how they mattered in a cataclysmic war.” The Office of Strategic Services, the forerunner of today’s CIA, eagerly recruited scholars and archivists, both men and women, for war work, favoring men otherwise ineligible for the draft, preferably a “mild 4-F.” It was a peculiar moment in history, when “librarians’ and collectors’ skills, expertise, and aspirations aligned with American military and political objectives” and when the everyday activities of librarians “became fraught with mystery, uncertainty, and even danger.”

The drama falls into three acts, tracking U.S. involvement in the war. Before the Japanese attack on Pearl Harbor, which prompted Hitler to declare war on the previously neutral United States, American agents had dashed across war-torn Europe inviting curiosity and suspicion from officials of all the belligerent powers. One such agent, moving perilously between the Third Reich and Russia, was questioned in four languages over two days before reaching his destination. Among the most daring was Maria Josepha Meyer, who made audacious sorties through Europe, collecting both fascist and anti-fascist literature, much of it moments before the Gestapo seized it from bookstores. The “petite forty-five-year-old American quietly outmaneuvered German authorities,” Ms. Peiss writes. From occupied France, Meyer reported that the Nazis “consistently foment confusion, spread false news. . . . The outlook is very dark indeed.”

Read on at The Wall Street Journal.