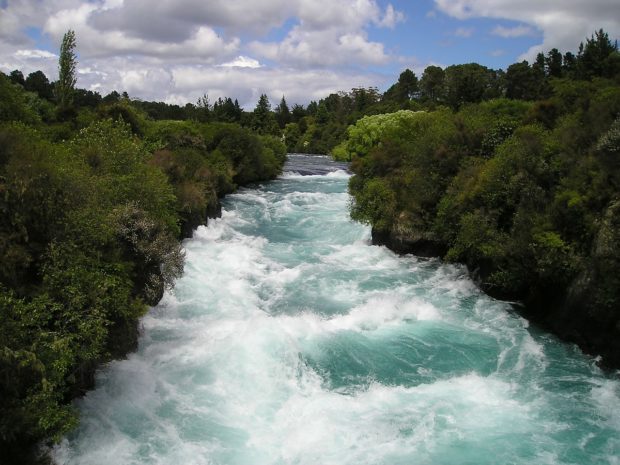 By 10:00 a.m. the sun is high enough
to shine down into the water where
the bottom on the far side drops off

into shelving limestone slabs, the “stairs,”
where large-mouth bass and walleyes keep
their counsel in the dark. No one dares

to swim those deeper reaches
but a few local boys, who know
what the river’s like in that stretch

above the deepest trench. It’s true
each summer some kid drowns, but still you love
the sky, the depths, the water’s moods

that take and carry you and prove
your understanding of what you’ve chosen
to be in, be it pools or a groove

between rocks where water shoots, loaded
with the force of what’s inevitably
still to come. My two children go

in the hot sun along a stony
path upstream to the railroad bridge,
to play at keeping all the crazy

river junk they’ve found. There on a ledge
categorized and displayed
along the stone trestle’s edge

where the water is shallow enough to wade:
sinkers, bobbers, hooks, and bright lures
lost like souls but good enough to save.

A child feels, under blue
skies here, like a rock-and-river god
diving for golf balls, happy to do

whatever the river asks. It’s understood
that being in the river is to be
a part of it. This summer it’s been good

to go out where the shelf drops into deep
water and dive in and swim free
of whatever it was I was supposed to be.

John Foy’s new book, Night Vision, was selected by Adam Kirsch as winner of the 2016 New Criterion Poetry Prize. It was published earlier this year by St. Augustine’s Press. His first book is Techne’s Clearinghouse. His poems have been included in theSwallow Anthology of New American Poets, The Raintown Review Anthology andRabbit Ears, an anthology of poems about TV. They have also appeared widely in journals and online, including The Hudson Review, The Village Voice, American Arts Quarterly, The Dark Horse, The Yale Review and The Hopkins Review.