“Fall on your Knees” by Kevin Cutrer 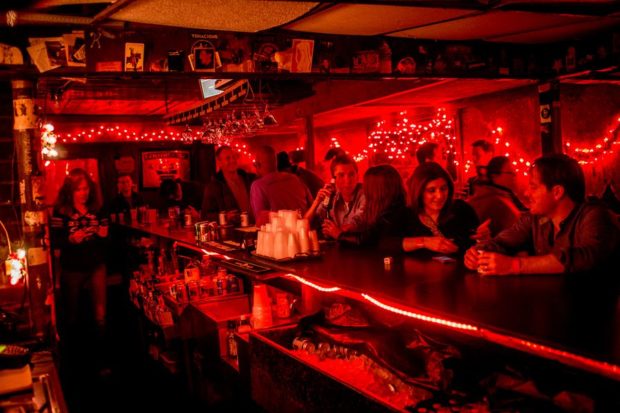 I’m not so drunk you’re really Santa Claus.
I’m only begging for your ear a while,
then maybe next time you come out for drinks
you’ll think twice before you show up dressed for work.

I bet it’s never right for them, the mothers.
The lighting’s dim, the elf gets in the way,
or else they want to haggle, always looking
for something free. Ain’t nothing ever free.
And you know yourself a two-year-old’s no better
than any rancid, riled up drunk in this dump.
No wonder Santa’s come to Shorty’s Tavern.

You know, my father always wanted us to believe
in you, and every year he had a scheme
to put out all our doubts once and for all.
One Christmas morning there were reindeer tracks
out in the front yard where the grass was thin
and it was muddy from a thunderstorm.
Well, that was all the proof it took for me.
Later I learned he’d sawed a hoof from a buck
his buddy killed, to fake those tracks. He went
to all that trouble just to fool his kids.

He’s almost ninety now and losing it.
I stop in here at times after a visit
to the Home, the times he thinks I’m someone else.
(Always the same for me, a double bourbon.)
The stink of antiseptic fills that hall
loud with the groans of gray, forgotten men,
the coughs of outcast grannies, TV static.
But I’m the only son who works in town,
so every day I bring him lunch and joke
around and try my best. I do my best.

Is it wrong to want never to go again
to those sickening, mirroring floors,
stooping to put new slippers on feet
that used to stand on cement nine hours straight?
Or is it wrong my fear, what brings me here,
what wakes me like a siren in the night,
is not that he will suffer, but that I’ll live
to wear those slippers on my feet, and hear
my son say his name at my blank stare?

Of course you haven’t got an answer, Santa.
You show up once a year expecting us
to sing the same tired songs, over and over,
give more no matter how give out we are.
You say come here, sit on my dirty lap,
tell Santa what you want. Well, all I want
is just to know I’m doing something right,
and if what right I do does any good.

The Lord’s Own Anointed

Kevin Cutrer’s first collection of poems, Lord’s Own Anointed, was published by Dos Madres Press in 2015. More recent work has appeared in Panorama: The Journal of Intelligent Travel, and is forthcoming in The Courtship of Winds and The Hudson Review. Originally from Louisiana, he lives in Boston.