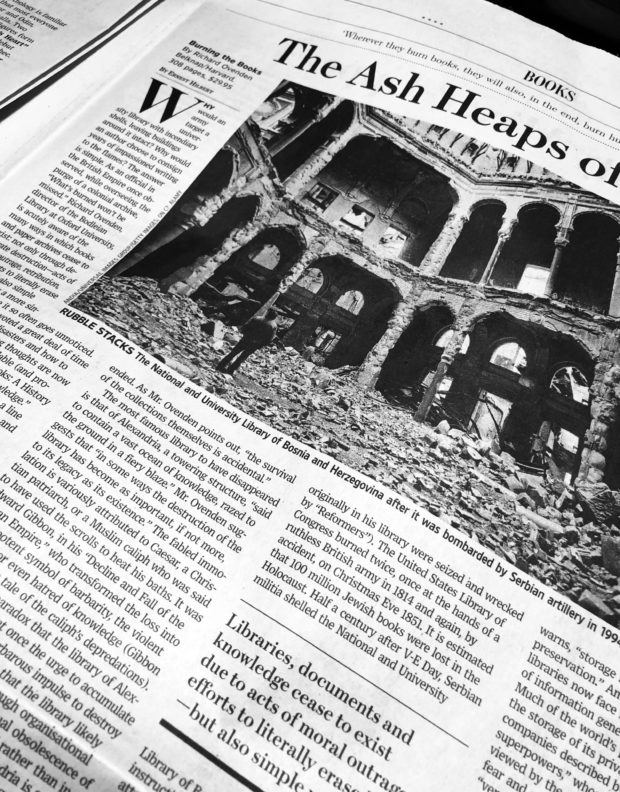 My review of Richard Ovenden’s fabulous book, Burning the Books: A History of the Deliberate Destruction of Knowledge, published in the US by Belknap/Harvard, appears in this weekend’s Wall Street Journal.

Why would an army target a university library with incendiary shells, leaving buildings around it intact? Why would an author choose to consign years of impassioned writing to the flames? The answer is simple. As an official in the British Empire once observed, while overseeing the purge of a colonial archive, “What’s burned won’t be missed.” Richard Ovenden, director of the Bodleian Library at Oxford University, is acutely aware of the many ways in which books and paper archives cease to exist: not only through deliberate destruction—acts of moral outrage, retribution, even efforts to literally erase history—but also simple neglect, perhaps a more sinister threat because it so often goes unnoticed. Fortunately, he has devoted a great deal of time to thinking about these disasters and how to prevent them. His compelling thoughts are now gathered in the eminently readable (and provocatively titled) Burning the Books: A History of the Deliberate Destruction of Knowledge.

Mr. Ovenden views himself as one in a line of librarians going back to the Bronze Age and to Apollonius of Rhodes at the library of Alexandria. He urges us to remember that “although the technologies of creating knowledge, and the techniques for preservation have altered radically, their core functions have changed surprisingly little.” Mr. Ovenden believes that what is handed down over time, from Alexandria to the Bodleian, is the “ethos that knowledge holds great power,” and that “its loss can be an early warning sign of a decaying civilisation.”

Read on at The Wall Street Journal.