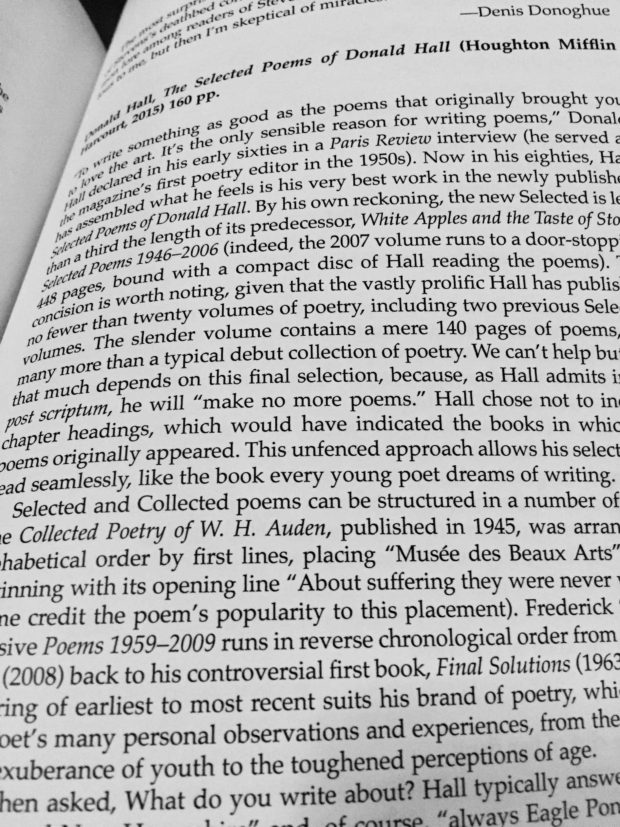 “To write something as good as the poems that originally brought you to love the art. It’s the only sensible reason for writing poems,” Donald Hall declared in his early sixties in a Paris Review interview (he served as the magazine’s first poetry editor in the 1950s). Now in his eighties, Hall has assembled what he feels is his very best work in the newly published Selected Poems of Donald Hall. By his own reckoning, the new Selected is less than a third the length of its predecessor, White Apples and the Taste of Stone: Selected Poems 1946–2006 (indeed, the 2007 volume runs to a door-stopping 448 pages, bound with a compact disc of Hall reading the poems). The concision is worth noting, given that the vastly prolific Hall has published no fewer than twenty volumes of poetry, including two previous Selected volumes. The slender volume contains a mere 140 pages of poems, not many more than a typical debut collection of poetry. We can’t help but feel that much depends on this final selection, because, as Hall admits in the post scriptum, he will “make no more poems.” Hall chose not to include chapter headings, which would have indicated the books in which the poems originally appeared. This unfenced approach allows his selection to read seamlessly, like the book every young poet dreams of writing.

Selected and Collected poems can be structured in a number of ways. The Collected Poetry of W. H. Auden, published in 1945, was arranged in alphabetical order by first lines, placing “Musée des Beaux Arts” at the beginning with its opening line “About suffering they were never wrong” (some credit the poem’s popularity to this placement). Frederick Seidel’s massive Poems 1959–2009 runs in reverse chronological order from Evening Man (2008) back to his controversial first book, Final Solutions (1963). Hall’s ordering of earliest to most recent suits his brand of poetry, which maps the poet’s many personal observations and experiences, from the remarkable exuberance of youth to the toughened perceptions of age.

Read on at The Hopkins Review.