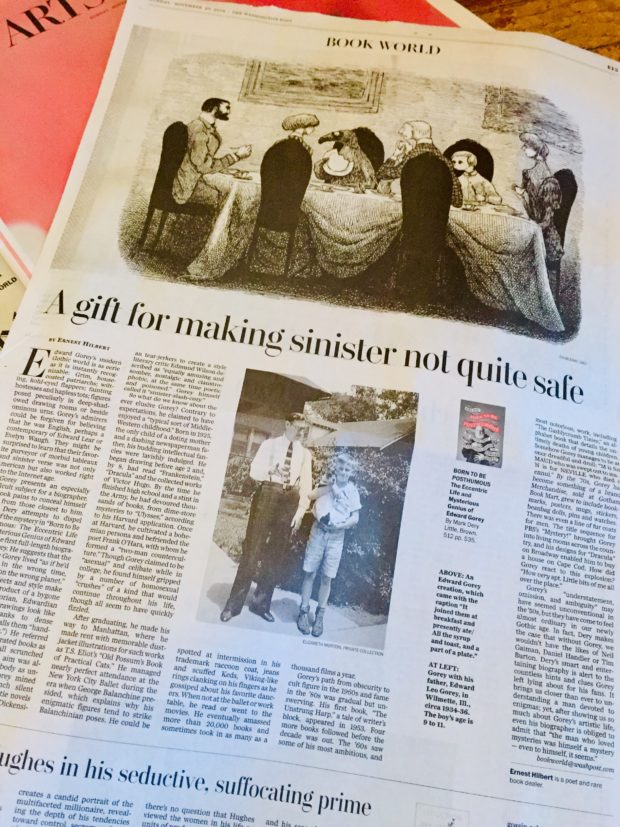 Does the artist Edward Gorey seem elusive and even mysterious to you? Well, it feels that way for his biographer too. I write about it in the Sunday Washington Post in “A Look Inside Edward Gorey’s Modern Gothic World.”

Edward Gorey’s modern Gothic world is as eerie as it is instantly recognizable: Grim, house-coated patriarchs; wilting, kohl-eyed flappers; fainting hostesses and hapless tots; figures posed peculiarly in deep-shadowed drawing rooms or beside ominous urns. Gorey’s admirers could be forgiven for believing that he was English, perhaps a contemporary of Edward Lear or Evelyn Waugh. They might be surprised to learn that their favorite purveyor of morbid tableaux and sinister verse was not only American but also worked right into the Internet age.

Gorey presents an especially difficult subject for a biographer. He took pains to conceal himself even from those closest to him. Mark Dery attempts to dispel some of the mystery in “Born to Be Posthumous: The Eccentric Life and Mysterious Genius of Edward Gorey,” the first full-length biography of Gorey. He suggests that the inscrutable Gorey lived “as if he’d been born in the wrong time, maybe even on the wrong planet.” Both his subjects and style make him seem a product of a bygone age: His Victorian, Edwardian and Jazz Age drawings look like lithographs, thanks to dense hatching. (Dery calls them “hand-drawn engravings.”) He referred to his spooky illustrated books as “Victorian novels all scrunched up,” adding that his aim was always “to make everybody as uneasy as possible.” Gorey mined everything from French silent films and Agatha Christie novels to Puritan primers and Dickensian tear-jerkers to create a style literary critic Edmund Wilson described as “equally amusing and somber, nostalgic and claustrophobic, at the same time poetic and poisoned.” Gorey himself called it “sinister-slash-cozy.”

0
"In Thankful Remembrance for My Dear Husband's Safe Arrival Sept 3, 1662" by Anne Bradstreet