“Directions to the Church” by G.M. Palmer 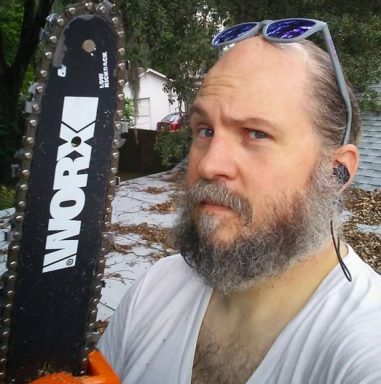 Bank left at sixty miles per hour on the flyover
past the bombed-out schoolhouse
no one can buy—
it’s not bombed-out for real,
just skeletonized;
we can see bombed-out buildings
in schoolbooks or shared snapshots
of the streets of Aleppo;
this building is merely abandoned—
too encoded to be released,
a bleak example of just how much we have.
Every empty building is an insult
to the homeless, the foreclosed, the refugee
who fears another tent’s night
against the elements.

Bank left at sixty miles per hour
as Jacksonville’s Indian summer heat
grabs you by the guts,
its moist mouth kissing and probing
like a poet who knows you won’t resist,
and as you burn, remember
it’s not the heat that kills in this flip-flop town
but the cold so wet it breaks the bones,
grows mold on abandoned homes
that defy ownership,
rending their roofs in half
to the elements of the night,
full of scat scattered around
and trash of undesirable origin.
Watch for merging trucks.

Bank left into traffic,
shocked that life can hold
so many cars,
turn left and left again,
then right and left and right
to a nearly vacant church.
Alone together, we wonder
what belief built this building
and who believes it any more.
We sing songs that echo
off of cracked acoustic tiles
and wait for a mission
to hit us like a missile from God.

The bombed-out streets
rise from the notes in my mind,
blank-eyed children conceived in dust
stare behind my eyes as we sing another hymn;
homeless men hold tattered signs
and lean on streets instead of us
while we turn the page and pass the plate.
They need nothing but these walls
we keep locked six days a week,
and we cannot harbor them
because the hearts that choose
are harder than the hearts that shoot.
We pray to forget or forgive.
We cannot open these doors.
We cannot open these arms.
We cannot take them.
We cannot answer the call.
We pray to forget or forgive
because nothing belongs to us.

Actors, agents, sharecroppers of the faith,
we’ve signed away our names
for the promise of salvation
but the possession always rests with someone else.
Held by possession,
passion becomes prurience,
action becomes impotence,
property becomes a weapon and not a tool,
and we are used.
Useless, we pray to forget or forgive.
Useless, we will not push these walls apart,
good deeds cannot crush a deed
entailed to someone else.
The law is not dead, and we must belong.

Without property lines, we are undefined
and we long for the liminal;
we beg for an edge
to scrape ourselves against;
we yearn for a shore to crash upon
because we must define ourselves
or drown in the definition.

G.M. Palmer lives with his wife and daughters on a poodle farm in North Florida. Find him online @gm_palmer.

0
Ernest Hilbert in Conversation at the Rosenbach

“Advice to a Prophet” by Richard Wilbur