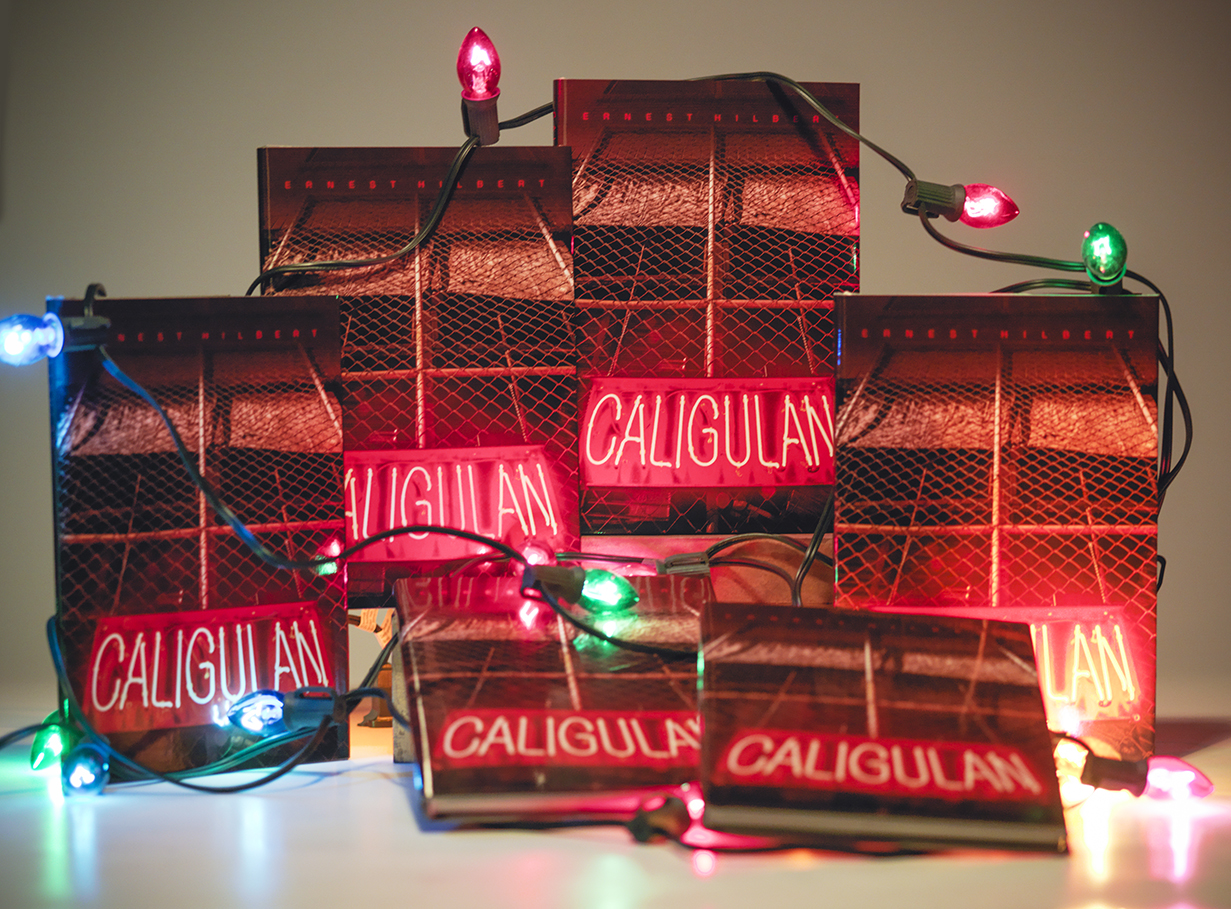 Support poetry, support small presses, support poets (or this one at any rate) by buying a copy of my latest book, Caligulan. Below I provide a number of ways to buy it in the country of your choice.

You can visit the book’s page on my author site to hear recordings and read more about it.

“Most Americans don’t like to talk about death, but Ernest Hilbert doesn’t mind. Death and decay is what he sees in Caligulan—his third volume of poems after Sixty Sonnets (2009) and All of You on the Good Earth (2013)—and he has little interest in spinning ‘Fictions fielding hopes of glory / Where none should be fulfilled.’ This is a question of temperament, as the title suggests, and reality. However we might feel, it’s relatively clear that the ‘seams’ of order, as Hilbert puts it in one poem, have been ‘unsewn.’ . . . An honest volume for dishonest times.” – Washington Free Beacon

“The poems in Caligulan have a wonderful resonance. These new poems have something very ‘Cal’ [Robert Lowell] about them, the very personal tone and settings combined with extraordinary perceptions. The fishing boats in ‘Barnegat Light’ returning ‘as silhouettes’ is a haunting, beautiful image. At unexpected moments, Hilbert reaches for, and finds, the sublime.” – Michael Steffen, introduction at the Hastings Room Series, Cambridge, Massachusetts

“Tough-minded and precise, Ernest Hilbert’s lyrics, like his old mirror left out at the curb, turn an unflinching gaze on pieces of inner and outer landscapes we often push to the periphery. The poems in Caligulan fashion a stern, witty, and often poignant music out of seemingly unpromising elements courageously glimpsed, combined, or imagined.” – Rachel Hadas, author of Halfway Down the Hall: New and Selected Poems and editor of The Greek Poets: Homer to the Present

“There are books of poetry that, if only readers could be induced to pick them up, might change their minds for good about the supposed incomprehensibility, preciousness, and irrelevance of modern poetry. Ernest Hilbert’s new collection, Caligulan, belongs to that rare class. After his beautifully rendered Sixty Sonnets and the eloquent All of You on the Good Earth comes this richly wrought new collection. Hilbert is a classicist in the finest sense of the term: he has a firm grip on the formal orders that have dominated the great tradition of Anglophone verse from the skalds of Beowulf and the Pearl Poet to the tight gems of darkness of Thomas Hardy, and he uses them to write poems that ring with very contemporary truths. A skillful artificer of forms of verse that have sometimes gone wanting or are unjustifiably neglected or despised after the earthquakes of modernism, he is afraid of neither tight meter nor demanding rhymes: he proves there is nothing whatsoever anachronistic about well-tooled verse; the rage of authenticity can speak as sharply in a sonnet as in a calligramme.” – Christopher Bernard

“Moved by beauty, attuned to the sublimity of natural things, livened by paradox, coaxed into song by pentameter, Ernest Hilbert’s rich new book covers more emotional ground than a reader has any right to expect.” – Rowan Ricardo Phillips, author of When Blackness Rhymes with Blackness

“There’s much pleasure, clarity, and discipline to the way Ernest Hilbert looks around him in Caligulan, at the complicated textures of city and landscape, and at all the stuff, the materials, the detritus, that make up a place, a time, and a life. In these easily formal, easily idiomatic poems you’ll read about a dishwasher—his ‘arsenal of cutlery, / The spider-eggy fluff / That clings like mold to crockery’—and you’ll also meet the stuffed moose at a science museum: ‘You still startle, filling half the false sky . . . . // You tower / In the same black forests I’ve traveled lately.’ Hilbert gets the details right, and he also gets the emotions right. ‘The smoke alarm fails, and your computer crashes’ while an ATM is ‘pitiless, displays a message for / Insufficient Funds.’ But there’s also this: ‘You want to fight. / You spit and shout. In daydreams you sing.’ This is a book full of the real, and also full of heart.” – Daisy Fried, author of Women’s Poetry: Poems and Advice

“Caligulan delivers on all of its title’s promise. Every poem evokes the world we live in: we know something is wrong and, in a minute, will likely be worse; but there’s beauty in the portent and in the self-awareness we need to see it. Hilbert’s remarkable ability to draw a scene so clear you immediately make yourself at home, and so suggestive you want to get out because you know you can’t settle in, makes this collection a page-turner in a way most poetry books can never be.” – Erica Dawson, author of Big-Eyed Afraid

“Caligulan may have a lurid cover and title and you may be able to purchase t-shirts advertising the book in a bespoke heavy metal font, but such paraphernalia should not distract us from Hilbert’s very high ambitions for his poetry. Individual poems can function in a similar manner to the book as a whole: distracted by his sometimes disheveled persona, you may want initially to compare this poet to someone like Bukowski, which is by no means a mean comparison to make, but I think that Hilbert writes very carefully to make himself heir to Shakespeare, Milton, Wordsworth and Wallace Stevens.” – Edward Clarke, author of The Spirit of Poetry