“An American Bookman in England” 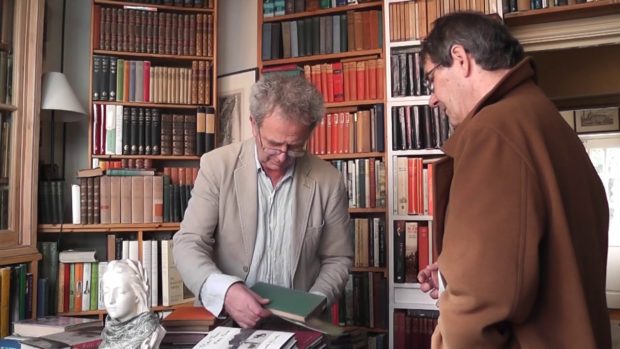 Pulitzer-prize winning book critic and collector Michael Dirda recently visited England to deliver the Richard Lancelyn Green lecture to the Sherlock Holmes Society of London (his talk was titled “The Rivals of Professor Moriarty,” on Victorian and Edwardian master criminals). Ray Russell and Rosalie Parker of Tartarus Press took the opportunity to film Dirda’s visits to several book shops (capturing his engaging and erudite remarks along the way). At one point he pauses, gazes wistfully at the shelves, and says “the reason bookshops are still wonderful is that you don’t always know what you want until you see it. You can’t always have that experience online. You look and you see what speaks to you.” He spins an amusing tale about his early days writing for The Washington Post Book World, when as a young man he strove to perfect his very first review on an old typewriter (he also reveals the secret behind the choice of typing paper he used to nail that first gig). While browsing (the title of his latest book), he mentions Patsy Cline, Henry James, American book collector Mark Samuels Lasner, Arthur Machen, Julian Symons, H.G. Wells, Kazuo Ishiguro, Waugh, Wodehouse, Terry Pratchett, of course Sherlock Holmes, and much more.

His perambulations take him to George Ramsden’s Stone Trough Books, Fossgate Books, and Ken Spelman Rare Books (all in York) and Bookcase in Carlisle. He is joined by Mark Valentine and Iain Smith. This is a fun little video for book lovers. Check it out.