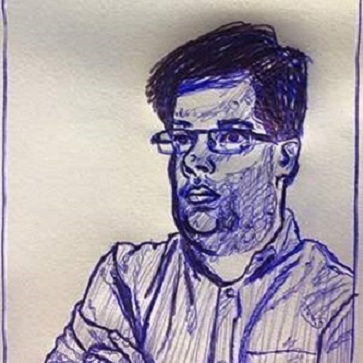 It started when she signed up for that class
on Business English. Business, like she ever,
ever could mine her business. I mean, I laughed.
Weeks and weeks of nothing but conjugating.
Then, when I ask her to get conjugal,
she licks a finger, flips the page so fast
the paper snaps like a whip.

She chants, witch-like,
her magic words. As if it all could change.
As if talking like a teacher lands a job,
or learning books will make our single-wide
the giant pumpkin from the old cartoon.
“I’m bettering myself,” is all she says.
But what she means is she wants out of it:
the single-wide, the hair salon, and me.

That’s why I done and got myself a room.
Done read the Bible Gideon left behind
to make sure I was right about how knowledge
will bite you like a snake. And you cain’t get
un-bit, now, can you? She called a while ago.
I said, “You know what, Eve? The apple’s yours.
I’ll stay in Paradise.” She didn’t get it.
She asked my whereabouts. “My whereabouts?”
I said. I said, “Between the ‘A’ and ‘T.’” Kevin Cutrer was born in the American South, has lived in South America, and now resides in the southernmost neighborhood of Boston. His first poetry collection, Lord’s Own Anointed, was published in 2015 by Dos Madres Press. His run-ins with higher education have occurred at Southeastern Louisiana University and Emerson College. The Hudson Review, The Dark Horse, The Raintown Review, and many other journals have published his poems, and he has been a featured reader for the reading series Mr. Hip Presents, U35, and Carmine Street Metrics. He shares news about his work, and work that interests him, at kevincutrer.com

Lord’s Own Anointed by Kevin Cutrer